The Rout Is Almost Complete 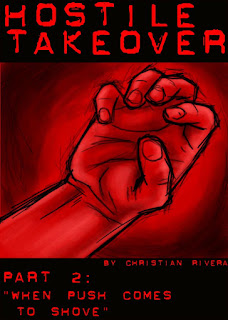 He will attempt to unleash a kleptocracy—the word comes from the Greek klépto, meaning thieves, and kratos, meaning rule, so it is literally “rule by thieves”—one that will rival the kleptocracies carried out by Suharto in Indonesia and Ferdinand Marcos in the Philippines. It is not that Trump and his family will use the influence of government to increase their wealth, although this will certainly take place on a massive scale; it is that hundreds of billions of federal dollars will be diverted into the hands of cronies, sleazy bankers, unethical financial firms and scabrous hedge fund managers. The pillars of the liberal state will be obliterated.

The appointment of Betsy DeVos (from a family with a net worth in excess of $5 billion) to become secretary of education means she will oversee the more than $70 billion spent annually on the Department of Education. DeVos—the sister of Eric Prince, who founded the notorious private security firm Blackwater Worldwide—has no direct experience as an educator. She promoted a series of for-profit charter schools in Michigan that make money but have had dismal academic results. She sees vouchers as an effective tool to funnel government money into schools run by the Christian right. Her goal is to indoctrinate, not educate. She calls education reform a way to “advance God’s kingdom.” Trump has already proposed using $20 billion of the department’s budget for vouchers. The American system of public education, already crippled by funding cuts, will be destroyed if Trump and DeVos succeed.

Rep. Tom Price, a Georgia Republican (net worth $13 million), has been selected by Trump to be secretary of health and human services. He plans to abolish Obamacare. He said he expects the House to push for Medicare privatization “within the first six to eight months” of the Trump administration.

Steve Mnuchin (net worth $40 million), a former partner at Goldman Sachs and the president-elect’s choice to lead the Department of the Treasury, told Fox Business that “getting Fannie and Freddie out of government ownership” is one of the Trump administration’s top 10 priorities. This is also the stated goal of Trump’s choice for budget director, Rep. Mick Mulvaney (net worth $3 million), a Republican from South Carolina.

The biggest pot of gold is the $2.79 trillion contained in or owed to the Social Security fund. The kleptocrats will work hard under Trump to divert this money into the hands of hucksters and crooks on Wall Street. Tom Leppert (net worth $12 million), the former mayor of Dallas, whom Trump is expected to name to head the Social Security Administration, not surprisingly advocates the privatization of Social Security and Medicare. The infusion of this kind of liquidity into an overheated stock market would probably bring on a crash that would evaporate perhaps as much as 40 percent of the Social Security fund, rendering it insolvent.


And on the Democratic side of the Senate, there is Charles Schumer:

We will not have a champion in the Democratic Party’s Senate minority leadership, headed by the party’s slicked-up version of Trump, Sen. Chuck Schumer (net worth $700,000). Schumer sits on the Senate Finance Committee, whose members are loyal and well-compensated allies of the 1 percent, and he is a member of the Banking, Housing and Urban Affairs Committee. His chief role in the party has been to raise millions of dollars from Wall Street for the party, himself and party candidates including his friend and protégé, the now disgraced Anthony Weiner, a former member of the House.

Indeed. But if history is any indication, the tendency for the richest to take everything indiscriminately with no concern for the majority of the people, always leads to a radical response eventually. In the years just before the French Revolution of 1789, it became common for the ruling-class to compete with each other for who could have the biggest, most elaborate carriages, with gold plated lanterns and Rococo decoration. The ruling-class seems to be congenitally incapable of seeing how their own actions lead to their downfall. It's like the flip-book of history showing the same sequence of events over and over. There will be tears before bedtime, and, I suspect, blood before morning.

"The Neoliberal rout is almost complete." Spot on Owen. The 30+ years of pursuing power through Neoliberalism is coming to its final stages. This time though the US's 1% under Trump is focused mainly on scamming and depleting any financial reserves the American people have left.

This will be the ultimate power grab. Who would have thought that the western democracies in the 21st century in 2017 would be fighting for their lives against a shared enemy, their own authoritarian governments?

I used to believe that most people could figure out when they were being scammed, Pam. I no longer believe that.

Sister of Eric Prince you got me, these oligarchs do not let nuts fall far from the tree.

Ah, yes, neoliberalism, started by a Dem. President, Jimmy Carter, and further entrenched by both Dems. and Reps. (Reagan, Bill Clinton, Bushes, Obama). Rather fitting that another of the ruling class should now complete the neoliberal rout, no?

Hillary would have completed the neoliberal rout too - just read her fawning private speeches to Goldman Sachs, courtesy of WikiLeaks. And also the part, also revealed by WikiLeaks, where she admitted that both she and her husband were out of touch with ordinary voters. What Shumer had received was peanuts compared to what Hillary had blown through: $1.2B, even more than Obama, and twice what Trump had spent, much of it from her oligarch donors (e.g., Warren Buffet).

Besides, after all that she had said about Trump being totally unfit to be President, she and hubby are now attending his inauguration. No, this is not how you show class - class is letting the voters judge for themselves whether either one of them is fit or unfit for the office.

At least to Chris Hedges' credit, he had repeatedly warned against voting for either Trump or Hillary. However, the same cannot be said about some of the people now lamenting about what is happening under Trump - they were the same people who had apparently believed Hillary was the lesser evil.

With apologies to the Family Research Council, money goes forth and multiplies best through selective inbreeding. The coupon lady is also daughter-in-law of Amway.

I still believe that Hillary was the lesser evil, Anon. But, at this point, it does no good to relitigate that case. As the witches said before Macbeth entered -- stage right -- "Something wicked this way comes."

One could argue, John, that the Trump government is a giant Ponzi scheme. Bernie Madoff would be impressed.

The Americans voted for him and now they can suffer the consequences. He isn't going to drain the swamp, he is adding alligators.

The Senate taking its queue from Trump decided to try to "eliminate" the ethics committee. That says a lot about the Republicans. Oh, well in 2 years Americans do have the change to change the balance of power in both houses. if they don't, well I think it reasonable to conclude they like being poor, getting poorer, and having no decent health care. You can not save those who will not be saved. by the time they figure it out, it maybe too late.

On the upside there are a lot of comedians who have a lot of built in material and Alex Baldwin will be on SNL for the next 4 years, unless of course Trump gets arrested for something. who knows.

As you say, e.a.f, you can't save those who don't want to be saved. Sometimes you can see a train wreck coming and you can't do anything about it.