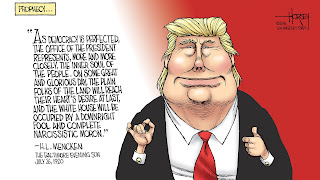 Donald Trump's real talent -- his only talent -- is knowing how to pick a fight. On Friday night he targeted players in the NBA and the NFL. At a rally in Alabama, he told his rabid followers:

“Wouldn’t you love to see one of the NFL owners, when somebody disrespects our flag, to say, ‘Get that son of a bitch off the field right now, out, he’s fired.  If NFL fans refuse to go to games, until players stop disrespecting our Flag&Country, you will see change take place fast. Fire or suspend!”


And, everywhere you looked yesterday, you saw athletes showing the Moron-in-Chief their fists. Some put their anger in words. Lebron James tweeted: "Going to the White House was a great honor until you showed up.” New England Patriots owner Robert Kraft -- up until now a Trump supporter -- expressed his "deep disappointment."

Kraft stood behind his players," Michael Harris writes, "ten of whom declined to stand for the national anthem before Sunday’s game against Houston. Harris believes this is a fight Trump can't win:

Trump is headed for a bruising. It may have started out with  [Colin] Kaepernick, but the ranks of those alarmed about racism in America is growing, just as Muhammad Ali electrified the anti-war movement in 1960s. It is no accident that Kaepernick is often seen sporting a T-shirt with Muhammad Ali’s face on it.

People love their sports and their players in a way politicians can only dream of. Trump has made a potentially fatal miscalculation in picking a fight with athletes the vast majority of the ‘deplorables’ who support him adore. That said, there were lusty boos at Foxborough when so many of the home team Patriots took the knee. Which is just to say, as wrong as Trump is, he is not alone in his warped patriotism.


And that really is the point. Trump's ignorant bluster is still a minority opinion. He knows he lost the election. He is in office because of an historical fluke called the Electoral College. And that fact is driving him crazy. That is why he can't get over Hillary. With each passing day, he increasingly looks like a man with a single digit IQ.


I disagree, Owen. Trump doesn't know how to pick a fight. Those who know how to pick fights usually don't. They choose their fights and they do it very carefully. They choose where and when and whom they'll fight and only when the circumstances align in their favour. That's not Donald Trump.

Trump picks fights but he acts compulsively. He's still trying to fight Hillary and for what? He's fighting his own party's Congressional leadership, McConnell and Ryan. He's alienating America's allies, especially in Asia and Europe. His fights are weakening and fracturing the country to the point where "leader of the free world" has defaulted to Angela Merkel.

He has no political acumen and no apparent interest in the heavy lifting required of a president. He has shown no grasp of important issues such as healthcare to the point where his focus now is simply on destroying it. He has no functional understanding of geopolitics. He's the presidential equivalent of a carnival barker. He recharges his batteries with weekends of golf and rallies of his equally economically and politically illiterate followers.

There are those who argue that Trump's instability is rooted in senility, perhaps dementia. If so that's not reversible. I have no doubt that America's vast network of intelligence and security agencies have a detailed psychological profile of Donald J. Trump and use it to evaluate his erratic behaviours. Some retired analysts have already suggested that eventually Trump will be taken out. Extreme as that sounds it's important to remember their oath is to defend America against all enemies, foreign and domestic. They have no oath of loyalty to the president.

That's an important distinction, Mound. It's more accurate to say Trump picks fights he can't win. And, with each successive fight, the stakes get higher. Perhaps you're right. Before he blunders into Armageddon, somebody will have to take him out. Perhaps Mueller will do it. It would be cleaner if Mueller sent him packing.

Trump understands Tribal and who is tribe is. Its a Serbian solution to the balkans.

Which is to say it's no solution at all, Steve.

Its the one eyed man in the land of the blind solution. This idea has a steady 20 to 30% following depending upon the seller.

President Alone On Hoax Island, Owen? How the man can lie, obfuscate and gaslight...in the face of overwhelming and piling-up evidence, tells me he may need a mental examination. Is he even fit to stand trial, let alone preside over the USA?

A good question, lovingit. The 25th Amendment allows for the removal of a president. It's never been used. It was originally drawn up to deal with physical illness. No one contemplated removing a president because he was mentally ill.


Now there's a scenario. Trump is impeached for money laundering and other high crimes. He's indicted on money laundering. With no other promising defence his lawyers have to argue he's mentally unfit to stand trial. Wowser.

Call me a fool, Mound. I keep believing that -- eventually -- it will all come down around Trump's ears. One hopes, of course, that this happens before he blows up the world.

Trump has far more control of his mental health than Reagan did. Thats his problem.

It's true that Reagan suffered from Alzheimers, Steve. That was a serious issue. But Trump's mental instability is much more serious. He's a very dangerous man.

Yeah. In the movie, if we survive him to see it, I'm thinking- bail court
then a hospital room. And history forever divided on the facts. He can't have
done this all by himself.

If you get Netflix, lovingit, take a look at the documentary, "Get Me Roger Stone." Trump didn't do all this on his own.

I don't get Netflix, Owen, but I've done some reading on Attwater, Stone,
and Manafort. Ever see the photo of them together, way back, when they were
quite young? Then, add Newt, Luntz, Rove, Norquist, the Heritage Foundation-
and the gerry-mandering, voter-suppressing GOP, itself- there is some undeniable lineage.

The documentary makes exactly that point, lovingit. These guys go back a long ways -- to Richard Nixon's dirty tricks operation.

I'm heartened to know there are still such things as facts, Owen.