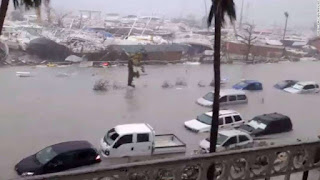 On Tuesday, Rush Limbaugh accused weather scientists of inventing Irma’s threat for political and financial reasons: “There is a desire to advance this climate change agenda, and hurricanes are one of the fastest and best ways to do it,” he declared, adding that “fear and panic” help sell batteries, bottled water, and TV advertising.


Then Limbaugh fled his Palm Beach castle. Even as Harvey and Irma tear up the Gulf Coast, conservatives refuse to talk about climate change:

For example, Scott Pruitt, the pollution- and polluter-friendly head of the Environmental Protection Agency, says that now is not the time to bring up the subject — that doing so is “insensitive” to the people of Florida. Needless to say, for people like Pruitt there will never be a good time to talk about climate.

Denying science while attacking scientists as politically motivated and venal is standard operating procedure on the American right. When Donald Trump declared climate change a “hoax,” he was just being an ordinary Republican.

And thanks to Trump’s electoral victory, know-nothing, anti-science conservatives are now running the U.S. government. When you read news analyses claiming that Trump’s deal with Democrats to keep the government running for a few months has somehow made him a moderate independent, remember that’s it not just Pruitt: Almost every senior figure in the Trump administration dealing with the environment or energy is both an establishment Republican and a denier of climate change and of scientific evidence in general.

They are a party and a government of the willfully ignorant. They would rather drown in their ignorance than face the future.

Image: CNN Money
Posted by Owen Gray at 9:53 am

I don't think they're ignorant. I doubt many of them even believe their talking points.

But the GOP agenda prioritizes the immediate profits of the few over the long-term health and welfare of the many. You see this in the attempt to repeal Obamacare, the gutting or non-enforcement of environmental regulations, and the defunding of science generally, including the NIH. The GOP agenda demands that people doubt scientific evidence of any kind so that the GOP appears to be acting in the interest of the many.

We shouldn't be surprised by this, it's just Harperism on a grander scale.

True,Cap. It's Harperism on steroids -- which, in short, is national folly.

Yup, but don't forget that most of these moves to the right come with a ratchet, with the so-called liberals acting as a pawl. How many of the Bush horrors were undone by Obama? Similarly, how many of the Harper changes has Trudeau rolled back?

The Neo-liberal dogma has affected all the parties, Cap.

Good question, Anon. But I need a couple of initials to publish it.

America is a country where the goverment tells you jet fuel burns hot enough to melt steel. And no one can raise an eyebrow.

What about the complete black out of tv news about BC wildfires. Is it my crazy conspiracy theory or does the governing establishment not want people het up about vicious wildfires in a province when they want pipelines to go through it.
And the msm falls into line.

Once again, a good question, Anon. But I need initials to publish it.

Anonymous said... , "What about the complete black out of tv news about BC wildfires."

I don't think it was a blackout. I think it was a combination of short attention span and that perennial Canadian problem of fascination with whatever is happening in the US. American news almost always gets priority over Canadian news.

As a side note, that is why we desperately need a well functioning CBC.

I agree, Toby. We desperately need a quality public broadcaster. I see I've broken my rule about initialed anonymous comments. But I'll let it stand. He/she makes a good point.