Dumb As A Bag Of Hammers 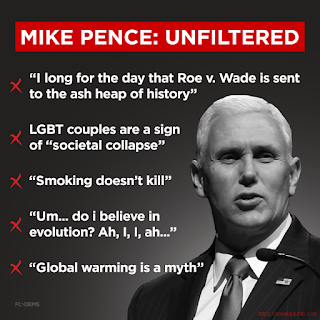 As the Republicans' third attempt to repeal Obamacare was going down in flames, Mike Pence was warning Alaskans that the last thing they wanted to do was to adopt single payer medicare. Alexander Panetta reports:

The vice-president of the United States has some less-than-complimentary words for Canada’s health-care system, which he accuses of certain “failings.”

Mike Pence made the remarks in an interview last week with Alaska radio station KFQD.

He was being asked about the Republican health legislation struggling to get through Congress.

Pence warned that if the legislative effort collapses, the U.S. will be on a course for something similar to Canada.

That’s because the Democratic party is starting to rally to an unprecedented degree around the idea of single-payer health care as a long-term solution to the U.S.’s endless health debates.

“We have a clear choice here,” Pence said.

“You know, somewhere in between where I’m sitting in Washington, D.C., and Alaska, is a place called Canada. I probably don’t need to tell the people in Alaska about the failings of national socialized health care because it’s right in our neighbour and you see the results every day.

“Look, we’ve got a choice: It’s between big government, Washington, D.C., solutions that ultimately, I believe, will collapse into single-payer health care — or whether or not we’re going to repeal the (Obamacare) individual mandate.”


God knows, our medicare system isn't perfect. Panetta admits that "Canada’s health system is known to suffer from long wait times, especially for elective procedures." However, "Canadians not only have longer life expectancies, but also spend far less on health care than Americans according to World Bank data."

If Trump goes down, he'll probably be replaced by Pence. And Pence is as dumb as a bag of hammers.

Image: joemygod.com
Posted by Owen Gray at 8:50 am

Email ThisBlogThis!Share to TwitterShare to FacebookShare to Pinterest
Labels: Pence On Canadian Medicare

Owen, you're much too hard on bags of hammers, Pence is lower than that- really anyone who can support Trump with a straight face ought to raise some eyebrows. Watching this repeal and replace fiasco reveals with utmost certainty that even as high as Pence the likelihood that he's even read the bill is rather low.

It's seems likely that Trump hasn't read the bill, waterboy. I would expect no less -- or more -- from Pence. Nice to hear from you.

It's funny how Pence can spew such nonsense with his gravitas, Owen, but I guess to the average American listener, his sober and, by contrast to Trump, sane, delivery gives him unusual credibility.

Apparently, Lorne, tone of voice rather than intellectual content is -- for many Americans -- a signnal of intelligence.

I wonder if Pence isn't a little bit brighter and far shrewder than we give him credit for. If you were in his shoes and saw the one guy who stood between you and a free, no questions asked ticket to the White House politically decomposing before your eyes, might you not play it exactly as Pence has been doing? Unlike Trump, Pence has values albeit particularly odious.

We're bound to have one of those two jackasses until 2020. It'd be great if Trump pegs out next year giving enough time for the voting public to see the real face of Pence before he had to stand for election.

I'm quite sure Pence can play the game better than Trump, Mound. He wouldn't make as many Republican enemies as Trump is making. On the other hand, I doubt he understands the world in which he lives. If he thinks climate change is a myth -- even after the recent hurricanes -- he's a fool.

Another know nothing, evangelical moron heard from. "Dumb as a bag of hammers." pretty well says it all. Only in America would he be able to display such ignorance.

He proudly parades his ignorance, Pam -- and he's rewarded for it.

Pamela Mac Neil said, "Only in America would he be able to display such ignorance."

I wouldn't be too sure about that. Check the Leader of the Conservative Party of Canada.

And a cynic would say, Steve, that Pence has been totally ineffective.

Toby. You're right and that is one of the reasons Canadians threw them out. I don't think there is another country on earth that has an anti-intellectual culture as severe as the U.S. There in fact intellectually bankrupt.

I'm hoping that Canadians will see behind the "progressive facade" of Trudeau. We'll find out in the next election, I guess.

Blogger Pamela Mac Neil said...
Another know nothing, evangelical moron heard from. "Dumb as a bag of hammers." pretty well says it all. Only in America would he be able to display such ignorance.

How come you are so hard on hammers?
Hammers can be quite useful.
Bags of hammers even more so.

It depends on who's using them and what they're used for, TB.

amongst real worries since global warming is a myth, is the the US will come for our water, and force us to accept their education, gun control and medical system. We gotta be all Switzerland on that,

So you believe global warming is myth, Steve?

No not at all, just being sarcastic.