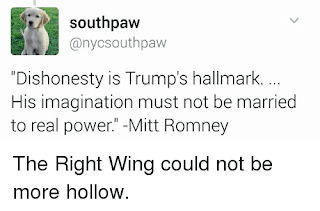 E. J. Dionne has Donald Trump's number. He writes in The Washington Post:


One of the most cynical quotations in history is also one of the most widely attributed. Let’s ponder the version associated with Groucho Marx: “Sincerity is the key to success. Once you can fake that, you’ve got it made.”

From the moment Donald Trump opened his quest for the presidency, this idea has defined him and served as an organizing principle of his politics.


It should be clear by now that Trump is an orange mass of insecurities, always worried about how his show is playing:

Everything that comes out of his mouth or appears on his Twitter feed is calculated for its political and dramatic effect. Trump is the exact opposite of what he tries to project: The thing he cares about is what others think of him. So he’ll adjust his views again and again to serve his ends as circumstances change. He’s not Mr. Fearless. He’s Mr. Insecure.

This is the most straightforward explanation for the fiasco created by the president’s mean-spirited decision to end the Deferred Action for Childhood Arrivals program, known as DACA. Trump was trying to square incompatible desires: to look super tough on immigrants to his dwindling band of loyal supporters, and to live up to his expressions of “love” (you have to wonder why Trump throws this word around so much) for the 800,000 residents who were brought to the United States illegally as children, conduct productive lives and are as “American” as any of the rest of us.

And then, when the bad reviews poured in, Trump backed away from even his muddle of a policy. He tweeted that if Congress didn’t act, “I will revisit this issue!” So a six-month delay might not really be a six-month delay. It might be extended. Or maybe not. Who knows? Adding an exclamation point to your waffling doesn’t help.


The man lacks an inner core. His persona changes with his ratings. He's the a product of reality television. He's the hollow president.

Image: onsizzle.com
Posted by Owen Gray at 9:50 am


We're witnessing a man with only the most rudimentary moral compass and the appetites of a goat. Everything is something to be gamed and that includes his base. That's hardly novel but Trump has taken this pandering to new heights.

What confounds me, Mound, is Trump's base. They don't seem to realize that they're being played.

His 35% are Harpers 30%. Will believe anything all the time.

And both men slyly leveraged their 30% to put themselves in the driver's seat, Steve.