A New And Better World 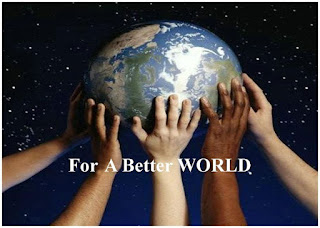 Thanks to Donald Trump, world alliances are being scrambled. Robin Sears writes that a new world order is appearing with each passing day:

Already we have seen both Angela Merkel and Emmanuel Macron publicly signal that an EU-centric foreign policy, not one led by the U.S., is their vision of the future.

China, less adroitly, continues to attempt to build an Asian sphere of influence. Their military advances in the South China Sea and the Indian Ocean have stimulated a budding South Asian strategic partnership. Nominally led by India, it is an attempting to unite all the nations of the region from Malaysia to Sri Lanka, in response to Chinese ambition. The old club of “likeminded nations” in Northern Europe are reviving their common cause on issues from climate change to the refugee crisis.


If Canadian politicians are wise, they will take note of what is happening and recognize that Canada could play an important role in this new world order:

This places Canada in a new and possibly important new place. Managing the relationship with the United States will always be a priority, but unlike the past two years, it should not be the foreign policy priority.

We are alone among the advanced Western democracies not to carry any colonial baggage in our relations with China, Japan and Korea. As members of the Commonwealth, the Francophonie, the OAS and NATO, we have an uniquely wide array of organizations and alliances through which to advance Canadian interests and policy goals.

Together, with a carefully selected group of partners, it might be wise for Canada to set out an agenda that encompasses a new 21st-century set of shared policy goals, early in the New Year.

Canada is well-equipped to play a role in United Nations and global finance reform, unfreezing the paralyzed WTO and giving the G20 a new injection of political energy.


Paul Martin was instrumental in establishing the G20. And other prime ministers have played an important role in global affairs:

As Fen Hampson’s new examination of the foreign policy legacy of Brian Mulroney, Master of Persuasion makes clear, when a Canadian prime minister has a focused agenda and supportive partners we can make a big impact on the global stage.

Two achievements of those years little known to most Canadians may point a path for another internationally engaged prime minister. Mulroney played an important role in helping Helmut Kohl to overcome French and British resistance to German unification at a very delicate moment.

He was also one of the pivotal players in imposing the sanctions on South Africa that led to the release and election of Nelson Mandela. We are perhaps at a moment where Canada can once again play a broader strategic role on today’s global crises.


We will not dominate in the new world order. But we could play an important part in establishing a new and better world.

Image: Godhum
Posted by Owen Gray at 9:12 am

Email ThisBlogThis!Share to TwitterShare to FacebookShare to Pinterest
Labels: Canada's Place In The New World Order

I like the thrust of Sears' argument, Owen, but I have to wonder, Chrystia Freeland's excellent recent foreign speech notwithstanding, whether Canada's current leadership has the depth of vision and integrity to play a pivotal role in the emerging new world order.

.. who was that Russian hockey coach ? Tikhonov ?

He said give me a team of Bob Gainys'
and we won't lose a game all year..

That's the issue, Lorne. Every generation is tested. We have a new generation of leaders. The next decade will tell us if they are up to the task before them.


We have long ignored our vulnerability in lashing Canada's economic and foreign policy so tightly to America's. It created an unhealthy dependence but, until Trump, we never imagined that would be used maliciously against us.

There's a real streak of sadism in that sick son-of-a-bitch. He measures his success by the extent to which he can cause others to lose. Many of his investors and partners and lenders learned that lesson over the decades.

Now we're told that Trump could drive Canada and Mexico into recession to "teach us a lesson." Unless something quite unexpected happens in the November mid-terms we had better prepare for the worst from Washington.

Whether we recognize it or not, change is upon us and it's picking up speed. This is the circumstance that demands re-alignment with like-minded nations of similar circumstance. With the exception of Alaska, America is not a northern nation. In some ways we have more in common with the countries of northwest Europe. Why shouldn't the remaining liberal democracies make common cause through mutual support to reject the illiberal/authoritarian contagion taking hold in eastern Europe, the US and elsewhere?

That, indeed, is the question we face, Mound. Trump doesn't recognize the need for alliances. But we should. And that doesn't necessarily mean aligning with those who are geographical neighbours. A common purpose makes a good neighbour.

Bob Gainey wasn't a showboat, sal. But he knew his game and he was very good at it. We could really use some Gaineys these days.

.. three dozen F-35's won't cut it.. Canada will never be a world power.. or a petro power.. Yes yes, we have some NATO responsibilities.. but first and formost should be our coastal defense and Search and Rescue.. all under the umbrella of DFO last I looked, or did herr Harper blow that away, like our inland and coastal marine protection legislation.. Ah yes.. the 'world class' dilbit cleanup.. the big myth.. with towering 30 foot swells.. or even worse in Hecate Strait.. they won't even leave port.. much less do some 'pray to gawd' cleanup. After it all blows away.. maybe they will venture out for a preliminary look see.. and deploy a boom or two.. and disposable diapers

Out 'priorities' are screwball.. Farmed salmon are eradicating our wild salmon
Good luck to any wild salmon smolts hit by sea lice.. enroute to the Pacific..

Trophy beras.. as long as you claim you ate some.. its all cool
Polar besr and Orca.. bye bye.. and herring as well
Clam beds ? Kiss em goodbye
And all the related & complex food chains.. sayonaro..

The cascade of extirpation is accelerating..
And all falls apart .. Crow, wolf, you name it
are lined up for colllapse..

But damn, those F-35's or Aussie F-18's are such a deal..
We have no navy to speak of
including 3 hysterical Brit submarines always in drydock

What's that all about ?

It seems to me we're at a turning point, sal. We really have to re-consider our place in the world -- and that alliance which we have taken for granted for so long.

Alliances are great as long as there is a mutual and equal agreement.
Sooner or later alliances fade as one side or the other take advantage of weaknesses in the other party.
And so it was with NAFTA.
NAFTA did provide economic benefit to Canada but at the detriment of Canadian ownership.
Trumps maga and tariffs irritate me more because the USA not happy with owning much of Canadian commerce now wish to own even more of us.


@Sal
But damn, those F-35's or Aussie F-18's are such a deal..
We have no navy to speak of
including 3 hysterical Brit submarines always in drydock

Nothing wrong with old CF18's .
After WWII many countries relied upon old war weary aircraft for their uses.
Actually it gives us breathing space( again) to decide on our roll in life.
Do we plan upon a Red October with the Russians swarming over the North pole to invade us as the USA envisages?
If we wish to bomb brown nations then the F35 is desirable!

BTW; the ex Brit subs are doing what they were bought to do ; that is patrolling the Pacific with half the crew that a surface ship would do.
If you critique the submarine purchase you will find that we,Canadians, have aweful submariners!!

Trump's prime directive, TB, has always been I win, you lose. And his goal is equally simple: I want to own it all.

Let's see what sal says, TB. We have a son in the navy, doing a deployment around the Pacific Rim. Last week they were in Fiji, building houses for the dispossessed -- hard power practising soft power.

That's a strategy Mr. Trump knows nothing about. In fact, with each passing day, it's clear he doesn't know much at all.