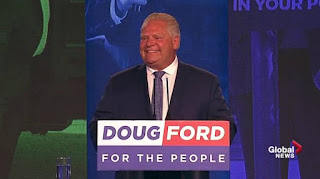 It was a dark night. You could see it coming. But that didn't make digesting the outcome any easier. H.L. Mencken didn't have any respect for the folks Doug Ford calls "the people." Mencken called them "the booboisee." Last night, the people elected a card carrying member of the booboisee. There will be consequences. Michael Harris writes:

Ford’s campaign has been a well-oiled hot mess, despite the machinations on Facebook of the right-wing activist group Ontario Proud. From being on the receiving end of complaints of violating Ontario’s campaign finance rules to appointing candidates rather than holding contested nominations, Ford has shown himself to have all the instincts of his deceased brother — and a few of Donald Trump’s.

Ford also made wild promises to wipe out Ontario’s deficit coupled with enormous tax cuts. How do you pay down the deficit with less revenue? How do you pay for the tax cuts themselves, unless by the tried and true way of cutting services?

Ford’s costings for his promises are about as reliable as a five-year-old’s first go at an abacus.


We've handed the car keys over to a child, who will undoubtedly cause chaos on the province's highways.

Anger is what fuelled Ford's SUV. And when anger pummels reason, we court disaster.

Image: Global News
Posted by Owen Gray at 8:39 am

Owen, as H.L. Mencken said, "Democracy is the theory that the common people know what they want, and deserve to get it good and hard."

I reckon he was right. Now drop 'em and bend over.

I think you misspelled his name Owen, that should be Doug Fraud !


It does sound like there's another locomotive barreling down the tracks, head on. WK was quick off the mark to point out that, if only the Liberals had listened to him, they would still be in power this morning. He's pushing Pupatello again.

Oh dear. I can put you in touch with a good realtor if the west coast suddenly seems attractive. Let me know.

In a democracy, the common folk cast their votes, Cap. But that doesn't mean they can't be conned.

Unquestionably, Rrual, he's a fraud. It'll be interesting to see what his supporters will do when they figured out that they've been had.

My wife joked yesterday that we may have to move, Mound. We lived through the Harris years. It was no picnic. Our experience in those years will come in handy now.

Clearly, Owen, we no longer have a basis for looking down on the Americans. It is difficult to retain a modicum of hope when stupidity, greed and ignorance prevail.

Those who elect populist leaders often suffer voter's remorse. If unhappy enough the pitchforks come out. Populist leaders can wind up like this man: https://en.wikipedia.org/wiki/Benito_Mussolini#Mussolini's_corpse

"A fnord is disinformation or irrelevant information intending to misdirect, with the implication of a conspiracy."

It's easy to appeal to our darker angels, Lorne. Shame on us for letting it happen.

Ford could very well become a victim of the rage that brought him to power, Toby.

Sounds a lot like the guy south of the border, Deacon.

The more modern reaction is what we're seeing in the states. The vast majority of Ford voters will entrench and find a way to deny basic reality, no matter what happens. At the comical levels of corruption already publically known, if voters were willing to change their minds about who to support they would have already.

You may be right, aweb. Perhaps we're dealing with a kind of collective psychosis.

Ford the Canadian Trump promises reduced everything just as his USA counterpart.
He offers this to a province already in debt just like his American counterpart.
Trumps America's debt is already increasing even with tax breaks and relaxation of environmental and safety standards.
The same will hold true for Ontario.
The next economic crash is going to be a friggin big one!

We've been down this road before, TB -- and it wasn't that long ago. We have very short memories.