Ignorance Is On The March 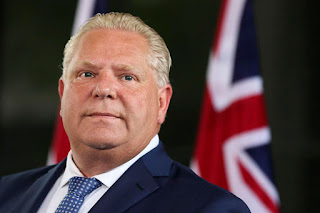 If you're looking for a clue to what life will be like in the Era of Doug Ford, Rick Salutin writes that you should keep your eye on education. That's because modern conservatives don't favour education. That was certainly true of Ford's conservative predecessor, Mike Harris:

Harris’s own public career began on school boards and he’d been a teacher himself. This disposed him negatively, not positively. For minister, he pointedly named a Grade 11 dropout, John Snobelen, who immediately told his staff to fabricate a “useful crisis” in public education to justify drastic attacks on it.

That included grabbing control of funding from local boards, undermining the public system with tax breaks for parents who put their kids in private schools, and bringing in standardized tests, which threatened to crowd out everything else done in classrooms. Teachers and their unions became Harris’s main opposition and everyone got used to frequent, sometimes illegal strikes.


I lived through two strikes in the Harris years. Mr. Snoblen did, indeed, create a crisis -- the effects of which have been long lasting.

South of the border, Donald Trump has also targeted education:

Trump placed his own ignoramus, Betsy de Vos, in charge there. Her life’s mission has been dumping public schools for private, so-called charter schools. Trump himself said, “I love the poorly educated.” That’s not the same as the uneducated, which could result from neglect. “Poorly” implies deliberate bad teaching. Keep them stupid.

The main pushback has come from U.S. teachers and their unions, often in “red,” Trump-voting states. It’s been breathtaking. Teachers have fought not just for wages, which are often far below average. They’ve demanded that the funding come from taxes on the rich or energy corporations, whose taxes had been reduced. They’ve allied with parents, who generally seem to get it since the aim is to bolster not just schools, but overall social well-being.


And, let's face it, Doug is not known for his stellar education. If it wasn't a priority for him, it should not be surprising if he chooses not to make it a priority for Ontario.

We live in a time where Ignorance is on the march.

Image: Toronto Star
Posted by Owen Gray at 9:52 am

Email ThisBlogThis!Share to TwitterShare to FacebookShare to Pinterest
Labels: Ford And Education


I was wondering about Dougie this morning when I read a Guardian article about how Canada's public libraries are rated the best in the world. How are we going to protect them in this era of "everyday low taxes"?

Dougie got in a fight with Margaret Atwood a few years back, Mound, when he tried to find "efficiencies" by closing some of Toronto's public libraries. At the time he said, “I don’t even know her. If she walked by me, I wouldn’t have a clue who she is. She’s not down here, she’s not dealing with the problem. Tell her to go run in the next election and get democratically elected. And we’d be more than happy to sit down and listen to Margaret Atwood.”

I suspect that Ford gets most of his information from television.

He's a driven man, Mound. But he doesn't see far and he doesn't think deeply.

Who needs education? Just eat up what you inherit and plan for a midlife career change cushioned by the proceeds of a family business bankruptcy fraud. In most cases you won't even have to spend a few years playing a cartoon character on TV.

And who's going to be our Betsy the Coupon Lady? Have we found some idle daughter or son of wealth who, given the right direction and provided that it makes a reality of some libertarian wet dream, would be interested in pretending her or his hobby is job for a while?

Some commentors are lucid on the problem. https://www.rawstory.com/2018/06/heres-higher-education-destroyed-5-basic-steps/#.WxU77DX4-n0.blogger

Thanks for the link, opit. Wells was right. The race is between education and catastrophe.