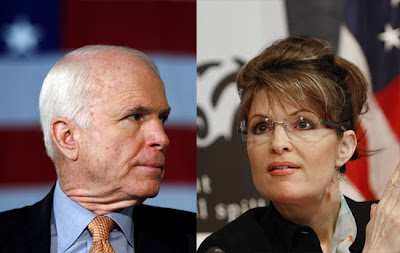 In the last two weeks, the Governor of Alaska has achieved pop star status -- and she has generated a great deal of controversy. I suspect that the controversy is intentional. For, in the final analysis, Sarah Palin is not a game changer. She is a diversion.

The problem for John McCain is that the wreckage of the policies he has championed -- whether they be his support for the Iraq War or his support for Freidmanesque economics -- is everywhere. That is particularly so today, when Lehman Brothers -- an investment bank which survived the Civil War and the Great Depression -- has filed for bankruptcy. With gas prices at record highs, with high paying manufacturing jobs disappearing in droves, and with people being evicted from their homes in record numbers, any politician who focuses on his or her record -- and the legislation which helped create this perfect storm -- is courting disaster.

So, instead, both Mr. Obama and Mr. McCain are focusing on the future. Both men have adopted "change" as their campaign theme. McCain has come late to that theme, having discovered that experience won't sell anymore. But there is a critical difference between each candidate's definition of change. Obama represents a cosmopolitan future -- his background symbolizes it. It is a future where -- unfortunately -- economic growth takes place in cities rather than small towns, and where progress -- economic and global -- requires interconnectedness between people, technology and governments.

McCain's definition of change is the one which got Ronald Reagan elected three decades ago. As Joe Klein wrote last week in Time, Reagan's "vision of the future was the past. . . .In his presidential debate with Jimmy Carter, Reagan talked about an America that existed 'when I was young and when this country didn't even know it had a racial problem.'" It was an America where most people grew up in small towns -- like Reagan's hometown of Tampico, Illinois or Palin's hometown of Wasilla, Alaska -- people who, Palin says, "run our factories . . . fight our wars . . . and are always proud" of their country. As Ms. Palin surely knows, there are very few factories left in small towns. And, as Frank Rich wrote in Sunday's New York Times, she neglects to mention that the source of her homage to just plain folks is Westbrook Pegler. When Pegler wrote the words Palin borrowed, Harry Truman was president. Pegler hated the president from the heartland -- just as he hated Eastern European Jews, who he thought were probably Communists. Indeed, Pegler believed that Senator Joseph McCarthy was his nation's saviour. I doubt Palin was aware of the source; she simply spoke the words she was given.

Unable to defend the present, and substituting the past for the future, the McCain campaign has instead decided to sell the American myth of the old frontier -- something which Palin is supposed to symbolize. She and McCain are the self reliant settlers who, in Huck Finn's words, "light out for the territory," and who -- good heartedly -- stand in opposition to a corrupt society. The problem is that "the territory" no longer exists, even as the corrupt society survives.

All of this says a great deal about McCain. The man who made his reputation as a straight talker is no longer rooted in the present. And Sarah Palin is McCain's desperate attempt to get voters to focus on something other than the present. Like Shelley's Ozymandias, he stands like a broken statue -- among the ruins.
Posted by Owen Gray at 9:30 am

Thanks fot the kind words, Owen. I am happy to be back. And I agree with this position you hold on Palin. The problem is that McCain is probably going to get away with it.

I've thought about your situation -- particularly as I've read about and watched what has been going on in Zimbabwe.

Let's hope the agreement will bring that country back.