A Few Words of Praise for Lyndon Johnson 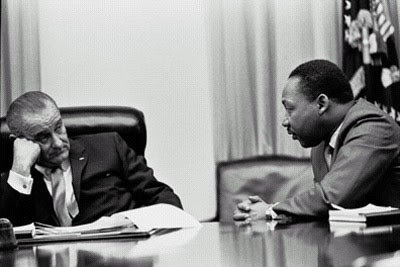 As a young undergraduate, I had neither respect nor admiration for Lyndon Johnson. My opinion of him was colored by the Vietnam War. And when -- as a graduate student -- I entered The University of North Carolina the year after he left office, I was certain that history would judge him harshly.

History has not been kind to the man who escalated the war and did so under questionable circumstances. The same pattern has been repeated under another president from Texas. But, as Johnson's biographer Robert Caro -- who has written three volumes on Johnson and is working on a fourth -- reminded his readers last week, the ascent of Barack Obama would not have been possible if Lyndon Johnson had not used his considerable -- if sometimes dubious -- skills to pass the Voting Rights Act of 1965.

"In March of 1965," Caro wrote, "black Americans in the 11 Southern states were still largely unable to vote. When they tried to register, they faced questions impossible to answer -- like the infamous "how many bubbles in a bar of soap?" -- but also the humiliation of trying to answer them in front of registrars who didn't bother to conceal their scorn. Out of six million blacks old enough to vote in those 11 states in 1965, only a small percentage -- 27 percent in Georgia, 19 percent in Alabama, 6 percent in Mississippi -- were registered."

When Johnson went before Congress in March of 1965 to argue for the Voting Rights Bill, there were protesters outside the White House. Their numbers would grow as the war continued. Johnson would go to bed at night, hearing the echoes of "Hey, Hey LBJ! How many kids did you kill today?" and knowing that he was the most hated man in America.

The war wrecked Johnson's presidency, because he insisted that he was not going to lose Southeast Asia the way Harry Truman had lost China. That dogged determination resulted in the deaths of tens of thousands of American soldiers. But it is one of American history's great ironies that it was that same stubbornness which gave African Americans the right to vote. For all his flaws, Johnson believed in the power of the franchise. "Just give Negroes the vote," he said, "and many of these problems will get better."

"Many of these problems" -- poverty, violence and hopelessness -- are still with us. But when Barack Obama accepted the Democratic Party's nomination for president last week, the world changed. Win or lose, there will be no more humiliation as black Americans register to vote. There will be lots of unease among some white Americans. You can see it in those who try to define Obama as a foreigner or an alien.

Racism is not dead. The basic question this election will answer is, "How alive and well is it?" But if Obama wins, it will be because he has increased voter turnout in all of American society. And for that, he -- and people the world over -- have Lyndon Johnson to thank.
Posted by Owen Gray at 10:09 am