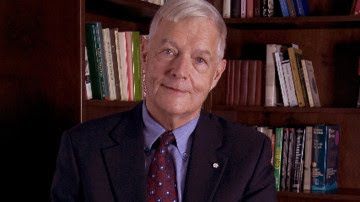 Last October, Michael Bliss speculated that Stephen Harper was on the verge of becoming this country's next Mackenzie King: "The government's policies are broadly acceptable to Canadians," he wrote, "it continues to inch upward in the polls, and it would very likely eke out a majority in a general election today."

On Friday, he appeared again in the pages of The Globe and Mail, proclaiming that the public outrage at Mr. Harper's decision to prorogue Parliament was "a tempest in a teapot and the opposition parties are trying to keep it boiling." Instead, Bliss advised, the Opposition should "take a golden opportunity to rest, reconsider and recuperate." For Bliss, it's all a blip on the radar screen. He appears to favour the government's agenda; and the means of achieving that agenda is not an issue.

Because Mr. Harper and the recently retired American president have so obviously drunk from the same well, Mr. Bliss's opinions should be considered alongside those of Thomas Frank, whose book, The Wrecking Crew: How Conservatives Rule, is a fascinating chronicle of the second Bush administration and its discontents. Frank says that neo-conservatives, like Bush and Harper, champion four key objectives once in office. First, they oppose bringing top notch talent into government service. Second, they wreck "established federal operations," because they disagree with them. Third, they make a cult of outsourcing and privatizing. And, finally, they pile up "an Everest of debt" in order to force government into crisis. The results are cataclysmic. "The ruination they have wrought has been thorough;" Frank writes, "it has been a professional job. Repairing it will take years of political action."

When one considers what the present government has done in office, the parallels are stark. The way it has treated Linda Keen, Paul Kennedy and Richard Colvin speaks volumes about its ability to attract and keep good talent. Its handbook advising caucus members on ways to obstruct government is a cynical attempt to shift blame. And Mr. Flaherty's last fiscal update mimics his colleague, former Ontario Education Minister John Snobelen, whose prescription for forcing change was to "create a crisis." The debris Mr.Snobelen left behind still clutters the province's schools.

Professor Bliss would have us believe that all it would take to change things would be for the opposition to have the courage of its convictions and force an election. But, as Mr. Frank makes clear, democracy is not just about elections. It's about what governments do between elections. And, the truth is that -- while Mr. Bush and Mr. Harper have no trouble with government -- they have a visceral hatred of responsible government. The issue is, how do citizens hold a government accountable between elections? Professor Bliss is unconcerned with that conundrum.

Joseph Campbell once remarked that the road to a full and a fulfilling life lay in "following your bliss." If, in the present circumstances, Canadians were to follow the good professor's advice, they would be collaborators in catastrophe.
Posted by Owen Gray at 8:19 am

Email ThisBlogThis!Share to TwitterShare to FacebookShare to Pinterest
Labels: Prorogation

As if elections in Canada solve anything. We've never actually voted Harper into government, but he gets there anyway. Nearly 2/3 of voters keep not voting for him. With first past the post, democracy seems to come in last.

Whether we arrive at some kind of proportional representation or stay with First Past the Post, things will not change until enough Canadians decide to take back their government.

The problem is that people like Bliss -- and those of his persuasion -- think that Mr. Harper represents no real danger.

If Orwell were alive, and living in The Great White North, he would have a lot to say about this government.

There is no effective mechanism for individual citizens to hold a government accountable for its actions beyond threatening what they may do at the next election. It's a sad comment on the quality of our opposition parties that despite the many misgivings Canadians may have about the policies and behaviour of Mr. Harper, that he doesn't appear to feel seriously threatened by the prospect of another election.

It is, indeed, sad that the opposition parties have been so spineless when confronting Mr. Harper.

On the other hand, as long as Canadians make it clear that they do not want another election, they will have to live with this Prime Minister.

We get the politicians we deserve.