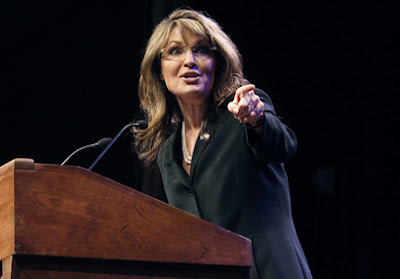 This is a winter of discontent. But, North and South, the winds of revolt are blowing from opposite directions. This past weekend, Sarah Palin addressed the Tea Party Convention in Nashville. "How's that hope-y change-y stuff workin' out for ya?" she asked the angry crowd. Calling for a revolution, she proclaimed that what her country needed was "a commander-in chief, not a professor of law." It was precisely what the Know Nothing Party wanted to hear.

In The Great White North, the anger comes from the opposite direction. It isn't proroguing Parliament that feeds the public discontent, Rex Murphy declared from his new perch at The National Post. It is the Prime Minister himself. "As long as there is an 'edge' to Stephen Harper," Murphy wrote, "as long as a good swathe of the electorate has this visceral distrust with where he may want to lead the country, and he by tactic or tone feeds it, his ability -- even in this period of weak and uncertain Liberal fortunes -- to gain a true majority is greatly circumscribed."

If there is a common thread which ties Palin's Tea Partiers to Harper's Conservatives, it is that both parties know the cost of everything and the value of nothing. The Palinites don't see universal health care as an investment which will pay dividends down the road. And the Harperites see attempts to slow climate change as a cost to the petroleum industry.

That is why Michael Ignatieff's announcement last week that the Liberals will resurrect their daycare program -- which the Harper government replaced with piddling monthly cheques -- is an important marker. The deficit, Ignatieff declared, should not be used as an excuse to "shut down discussion in this country about social justice." The Conservatives may favour stay-at home-childcare, but it can't be done on $100 a month.

And Ignatieff's focus on the young is critical. It is true, as Jeffrey Simpson wrote last week, that few politicians are giving much thought to the social costs of aging. But it is equally true that government policy has been tilted -- for decades -- towards the needs of baby boomers. It is not enough to fulminate about the debt we are leaving our children. The real question is whether that debt is consumptive debt or invested debt. If we invest in the young, it will pay dividends in the future. Perhaps the single most significant thing the Tories did was to reduce the GST. They signaled that they were hellbent on consumption. And their attack on Stephane Dion's carbon tax was the same song with the same refrain.

Sarah Palin and Stephen Harper -- as well as their acolytes -- are lost in the past. They may huff and puff as much as they choose. But it's only hot air.
Posted by Owen Gray at 7:45 am

It's no accident that the U.S. Republicans are making political gains against President Obama while our Conservatives continue to hold their own, despite doing their best to screw the majority of their constituents, either short-changing their health care or schooling. Both parties know on which side their bread is buttered, and who butters it. That's why they continue to represent the pecuniary interests of the influential minority, who own the means to hand them the power they want. Far from not knowing the value of things, these parties have a superb grasp of it! It's a matter of what one values, isn't it?

A very shrewd observation. Like all courtiers, they have a keen sense of which way the wind blows.

Which leads to the problem of getting money out of politics -- something that is not very likely.

Still, corruption doesn't have to be the norm.