They Call The Shots 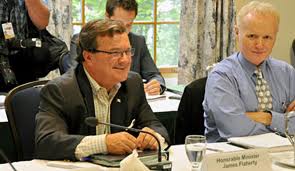 The Globe and Mail  reports this morning that:

For two days every summer, a select group of CEOs, other business leaders, and policy experts is invited to a retreat with the Finance Minister. The event is private. Participants are allowed to talk about the meeting afterward, but cannot reveal who said what.

No one knows exactly what is on this year's agenda. But, through an access to information request, The Globe has discovered what was discussed at last year's retreat:

During last year’s sessions with business and policy leaders in Wakefield, Que., the minister was urged to adopt measures to reduce the pay of Canadian workers, limit union power by enacting U.S.-style right-to-work legislation, and allow two-tier health care.

The details are in a briefing note to Mr. Flaherty from his deputy minister that summarizes what was said.

There were also calls for a higher retirement age and to open Canada’s shipping, telecom and airline industries to more foreign competition.


Compare the deputy minister's summary with the recently passed federal budget, and you have a disturbing picture of who calls the shots in Harperland. Where did the changes to OAS come from? What about the "reformed" employment insurance policy? And then, of course, there is the government's decision to pay foreign workers 15% less than the current Canadian wage -- which depresses all Canadian wages.

In fact, The Globe reports:

Labour issues surface in several discussion categories, with the general view that Canadian workers are overpriced. “Need to address wage differentials in labor market among countries; we are losing jobs to other countries,” the memo reads. “Right to Work legislation should be pondered as it creates inequities in productivity; US example was provided.”

The memo indicates calls were made for junior public servants to be paid less. “Reduce public service wages (not in higher ranks, but those in the lower ranks such as administrative and clerical staff as they earn more than their private-sector counterparts) and reduce the overall size of the public service.”


It was all in this year's budget. It's pretty clear who calls the shots.
Posted by Owen Gray at 9:30 am

Email ThisBlogThis!Share to TwitterShare to FacebookShare to Pinterest
Labels: Big Business In The Saddle

I looked at the picture and I thought it was Ezra Levant .... Does it make any difference ?

Yeah, but I'm invited to the annual "Sit Down and Here What the Schmoes Care About" conference.

I've been putting my name in for years and they finally accepted me!

We get to sit down with some intern (or something) from the PMO and we're free to take notes, and even film things (TAKE THAT! STUPID CEOs!) and give copies to the media.

Because nobody gives a shit what we think. (Except for harper. The tradition is that the intern has to brief harper on the conference in 2-3 minutes through the door of a bathroom stall while harper takes a shit.)

You know, salamader, I've never made the connection before. Who knows? Perhaps they were separated at birth.

So, that's where the throne room is, thwap.

The war on women continues as they push for lower wages for pink collar public servants (clerical and administrative personnel).

It's interesting that they targeted those civil servants who were on the low end of the pay scale, Bejing.

Equity has nothing to do with their programs. The little people are the enemy.

I know I'm always harping on education, but in the U.S. some years ago, a gathering of the Wingspan Group - largely business people with a few sympathetic educators - gathered to give the federal government their wishes for education. Surprise! Much of what they wanted has found its way into American and, for awhile now, Canadian education.

Sometimes it amazes me that the people have any voice left at all.

When Mike Harris took over in Ontario, Chris, he "reformed" education. His first education minister dropped out of school in Grade 11 and never returned.

The new minister famously said that sometimes the best way to reform something was to "create a crisis."

Mr. Flaherty, Mr. Baird and Mr. Clement were his cabinet colleagues. They insisted on centralizing control in all their ministries.