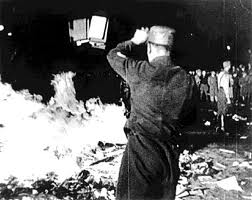 Valerie Knowles writes this morning that, to date, the press has paid little attention to what federal budget cuts have done to government libraries:

To date, the Immigration and Refugee Board, Transport Canada, Public Works and Government Services Canada, Public Service Commission, National Capital Commission and Canadian International Development Agency libraries have been closed. Other libraries, such as those at Citizenship and Immigration Canada and Human Resources and Skills Development Canada are scheduled for imminent closure. In still others, staffs are being drastically cut.

Even when forward-looking library managers take into account the reality of digital publishing and act accordingly, they and their staff, to say nothing of outside researchers, cannot but deplore the consignment of valuable books, documents and photos to basements, where they will be out of reach of researchers and in danger of being lost forever.


Along with the gutting of Statistics Canada,  the Conservatives are systematically destroying government data bases. And this is of no small concern. Government documents illuminate how decisions are reached. Take, for instance, the business of refugee policy. Knowles writes:

Developments in refugee policy at the Cabinet level can be tracked online, but the critical decisions made by the Cabinet were communicated to immigration officials in an “Operations Memorandum” inserted in an immigration officer’s instructions manual. “These instructions,” reports Michael Molloy, [President of the Canadian Immigration Historical Society] “governed how Canada resettled refugees from Chile, Uganda, Eastern Europe and the early phase of the Indochinese refugee movement and had a profound impact on Canadian refugee procedures down to this day. So far as we know, only one copy of the Ops Memorandum still exists: in the Immigration department’s library, which will close in September.” At this writing, it is unclear what is to become of historical material of this sort when this — and other libraries — close.


Commentators have had a lot to say about the Harper government's war on science. But  that war is being fought on several fronts. In fact, the Harperites have declared war on knowledge. The reason is simple: knowledge is power. And, if the public is given access to knowledge, they can mount their own counter offensive.

facts have an anti-harper bias.

Precisely, thwap. That's why they must be banished from the realm. The serfs must not know the facts.

I get so tired with accusations like these leveled against one of our greatest prime ministers. Why should the public have ready access to such government documents? It's not our business. We weren't elected to run the Country, Mr. Harper was. As an old friend recently reminded me with a quotation from Edmund Burke, great political leaders don't make decisions to accommodate fads and whims. They make decisions regardless of public outcries for the good of a country. That takes wisdom and courage, something that's been sorely lacking in our leaders for a long time.

Actually, Blue, Stephen Harper is following a fad that has been popular for over forty years now.

And I suspect that Burke would not call him "conservative." Rather than preserving national institutions, Mr. Harper has been doing his best to get rid of several of them -- like the government libraries Knowles mentions.

As Pierre Trudeau once said, "Bleeding-hearts like you make me want to puke" - or something like that. Casting aspersions on Mr.Harper won't work now that we have the majority. During the next fifteen years, just watch us! Trudeau said that too - or something similar.

Someone once dubbed Harper the Anti-Trudeau. Blue.

It's interesting that, in many ways, Harper is the photographic opposite of the man he claims to despise.

Harper would deny it. But, in some ways, their personalities are similar. It's just that they support diametrically opposed visions of what the country should be.

Knowledge is under attack on many fronts, underfunding in education too is eroding our ability to be an effective citizens.

I was always struck, Chris, by the passion Thomas Jefferson held for education. Without it, he said, Democracy wouldn't work.

The man had his contradictions. But when it came to education, he put his money where his mouth was. That's what the University of Virginia was all about.

What say you of this?

Your freind Stephen Harper is a treasonous cowardly war criminal:

"Why should the public have ready access to such government documents?" - You must be kidding, right? Either that or you are exteremly ill informed about how a democracy is supposed to work. What do you think Hansford is all about. I suppose you did not make it by kindergarten, they flunked you out and then you never pursued a further education, right?

"People like you make me want to vommit."
I don't want to believe you are serious just uneducated.

Owen, thanks for bringing to our attention this important development in Harper's ongoing war against Canada. Unlike True Blue, who seems to have a rather child-like naivete surrounding the Prime Minister's motives and capacities, I choose to be an informed Canadian and think for myself.

Isn't that the purpose of education, Lorne -- learning how to think for yourself?

Kind of reminds you of book burnings in Nazi Germany but Harper doesn't want those comparisons made so he just puts them in the basement.

To deny people information is to deny them knowledge. Without knowledge people can't make an informed decision about what is best for them.

We only have to look to Texas where there is a group trying to pass legislation which would prohibit the teaching of "critical thinking". Harper is doing the same thing but in a sneaker manner.

This should be a reminder to Canadians, it is not a good thing to give people like Harper a majority government. At least we can vote him out of office next election, that is if he doesn't cancel elections & determines he is the "supreme ruler". In my opinion, however, he is trying to rig the next election anyhow with the changes to the elction boundaries, etc.

You can bet, e.a.f., that Harper has given some thought to the next election. That is why the opposition parties should do the same.

I thank Goodness that a great majority of people are speaking against this Crime Ministers' fascist dictatorship. He needs to be "repealed" like the environmental laws. Join the movement,,STOP HARPER from destroying our great Nation. See "Canadians Rallying to unseat Stephen Harper" on facebook

Thanks for the tip, Anon. Perhaps some readers of this post will go to the site.

I thought it was against the law to destroy government records? Databases are government records and I always thought that tacking on the destruction of the Long Gun Registry database worthy of a court challenge.

I guess the Harperites think that the Long Gun Registry is the 21st Century version of the Avro Aero, Bejing. If they could, they would ditch the database in Lake Ontario.

As for laws and international agreements, they don't feel bound by those. Consider the agreement to return Omar Khadr to Canada.

As Harper told his security detail sometime ago: "I was under the impression that I make the rules."

Yhat was supposed to be hansard not hansford in my post above trying to educate froo froo Blue...

I know, I know true is gonna say we are not allowed to read those either, he and harper agree it ain't none of of our business in harper's government view, ain't that right blue you kinder monster you?

Sorry folk's for the unintentional confusion.

I think folks understood the reference to Hansard, Anon -- which to date is still in the public domain.

I think it is funny when people use Burke to promote their political position. Most people forget that Burke began his career as a Whig and only became a Tory because of the French Revolution. He then became a blind advocate of the most tyrannical Prime Minister England has ever seen. Pitt had no interest in Democracy and introduced countless efforts to undermine freedom of speech, freedom of association, and freedom of the press - all of which Burke supported.

Then, to add insult to injury, people forget that all the things Burke despised - like universal suffrage, parliamentary reform, social and political equality, and genuine equality before the law - are all things that Western Democracies now advocate as "natural" rights.

If you like Burke, then be consistent and advocate a return to aristocratic government!

And make no mistake. Harper is a revolutionary. He seeks to overturn Canada's liberal democracy.

Burke probably would not be impressed with the Canada which has evolved over the last 145 years.

But he would still be deeply suspicious of Stephen Harper.

That is a good point Owen, above all Burke suggested that once traditions were set and part of a culture, they should not be changed quickly or out of hand. Change should, according to Burke, be slow if nothing else. Haper, on the other hand, is attempting to wipe out the entire culture of Canada in a matter of a couple of years. And there is nothing Burke-ian about that.

No, there is nothing Burke-ian about Harper, Kirby. Whether they start out on the right or the left, men like Harper are dangerous.

They're quite willing to burn down the whole building. Wisdom is not their strong suit.