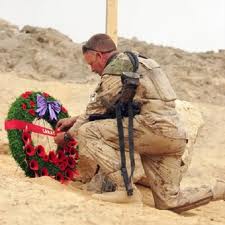 For Stephen Harper's Conservatives, war is a big deal -- as long as it generates good ad copy. This government is spending $28 million to commemorate a war that happened two hundred years ago. But, as veterans gather at the War Memorial on Parliament Hill tomorrow, they will be engaged in yet another battle with the Harperites to remember the soldiers who have returned from Canada's wars -- most recently the War in Afghanistan. Tom Walkom writes in today's Toronto Star:

This week’s appearance on Parliament Hill of disabled veterans and military widows critical of the government was just the latest chapter in an ongoing dispute.

Disabled veterans had to take Ottawa to court once to stop it clawing back portions of their pensions.

Now a separate group of vets is suing the government over another pension issue — Ottawa’s decision to replace lifetime disability pensions with a cheaper, one-time, lump-sum payment.

In the first court case, Stephen Harper’s government spent $750,000 in legal fees fighting its own vets and conceded defeat only after the judge ruled Ottawa’s clawbacks blatantly unfair.


Hypocrisy has been the byword for this government ever since it came to power. But it is particularly galling that these armchair warriors should treat Canada's living veterans with such disrespect. However, it's worth remembering that Mr. Harper defined contempt as being outvoted in the House of Commons.
Posted by Owen Gray at 8:40 am

If I were Harper, MacKay, or any of Harper's so called Conservatives? I wouldn't be showing up at any Remembrance Day Services.

Harper's not broke. He can ship his armored vehicles where ever he goes, for over a million. The more Harper has Canadians and other country's despise him, the more paranoid he is about his security. On Halloween, kids had to leave their toy swords, on a table at the bottom of Harper's driveway. How is that for pathetic?

There is Harper's $1 billion, for a stupid fake lake. $11,000 per hour jet, to take in a hockey game. $50 million to buy a riding with gazebos. Bev Oda isn't the only one who loves her luxury hotel suites, just ask Flaherty and MacKay. Harper and his CommieCons theft and waste of our tax dollars list, is as long as a city block and totally obscene.

What about the services we pay through the nose for? Harper Has butchered and slashed them. Is he putting our tax dollars for them, in his own coffers? Billions for, corrupt greedy banks, mines, big business and Harper's favorite charity, big oil.

Any province with a lick of sense, had better get the hell out, of Harper's Canada.

The Harper government is no more hypocritical in its treatment of combat veterans than any previous Canadian government has been since the end of World War Two. Then, when no family was safe from having a son conscripted and the entire nation felt itself at war, there was nowhere for the government to hide if it failed to treat veterans with respect.

However, when wars such as the Korean War have been fought with professional soldiers instead of with conscripts and countries as a whole haven't felt themselves at war, veterans of those wars often have been poorly treated.

The treatment of professional British soldiers who fought Montcalm at Quebec or Napoleon at Waterloo followed a pattern centuries old: lauded in wartime, those men were lampooned and excoriated in peacetime. The veterans so poorly treated by the Harper government are of this kind - professional volunteers.

You may think that since these men and women were willing to risk their lives for their country when others didn't(or wouldn't), that they deserve special consideration and respect. I do.

No sane person can fault that reasoning, I believe.

But what I'm arguing is that the Harper government's dastardly treatment of our veterans really is not out of the ordinary in the context of history and the rest of the world.

That's not much of an endorsement of humankind is it?

Let's hope it doesn't come to that, Anon. It would be much better for us all if Harper would make his exit and leave all the provinces under the same roof.

No it's not, Anon. And, you're right. In the end, there is more to be said for the citizen shoulder than for the professional soldier.

When you professionalize your military, they become hired help you can hire and dismiss -- like any other employee. My point is simply that you don't treat your soldiers -- citizen or otherwise -- like that.

If you do, you simply repeat what Wilfred Owen wrote was "the old lie:" Dulce et decorum est pro patria mori."

While Anonymous makes the very valid point that Harper's mistreatment of veterans is part of a much larger historical pattern, for me the difference is his overtly hypocritical politicization of the military. Who can forget, for example, when Jack Layton's daring to question our involvement in Afghanistan was met by by the Conservatives' sanctimonious labeling of him as 'Taliban Jack'?

It brings to mind the old adage that patriotism is the last refuge of the scoundrel.

Mr. Harper may glorify the military, Lorne; but he stands in a long line of men who could not do what he glorifies.

And, if he had any experience of war, he would not try to glorify it.

The military is there to serve Harper's government, not the other way round. Harper doesn't care about the individuals who are wounded or killed. they have served their purpose & they are expendable. Politicians have always treated returning veterans as yesterday's newspapers. I don't expect it to change. People who enter the military should realize that in advance.

Your last sentence is very important, e.a.f. The people who send troops into battle do so from way behind the lines. It has been that way for a long time.

In fact, it seems to me that there is an inverse relationship between rhetoric and geography. Those furthest away from the battle are the loudest cheerleaders.