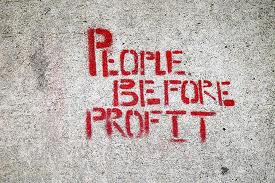 In yet another sign that, for Stephen Harper, profits come before people, the Globe and Mail reports that Ottawa is signaling a radical shift in foreign aid:

The federal government is signalling a profound shift in its approach to foreign aid that could see Canada’s international development agency align itself more closely with the private sector and work more explicitly to promote Canada’s interests abroad.

Stephen Brown, who teaches international development at the University of Ottawa, said CIDA has not dramatically shifted its spending toward private-sector partnerships. “But in terms of signals and signs of things to come, [the shift] is quite profound,” he said.

Dr. Brown said some partnerships with the private sector can be useful, but questioned Canada’s eagerness to work with the extractive industry when mining rarely offers much benefit to the communities in which it occurs. “If our real goal is poverty reduction, that’s not the strategy we would choose,” he said.


The foreign aid initiative isn't surprising. After all, poverty reduction at home isn't one of Harper's goals. Why would he try to reduce poverty abroad?

He is, however, being true to form. He is corporate Canada's best friend.

Since Harper's so called majority?? This country has become a, putrid, rotten, cesspool of corruption.

The chuckle of the month was. Harper sending a weird outfit of his, to the Ukraine. They were to make sure, the Ukraine election was, Democratic, honest and fair. That was the funniest thing, the House had ever heard of yet. They said. Harper cheated to win his own election. There was nothing, democratic, honest nor fair in Harper's own Federal election. The election was dirtied, fouled, unfair, undemocratic, cheated and not even valid.

It's a given. Harper gives billions of our tax dollars to, corrupt greedy banks, mines, large corporations and big oil. Harper also gives them huge tax reductions. Harper steals from the tax payers to give to, the wealthiest huge corporations in the world.

And the corporate elite sing his praises, Anon.

Yes, the elusive trickle down effect (last seen running into the wilds of the Upper East Side of Manhattan with billions in investors' money) will again rear its ugly head.

And it wouldn't happen, Chris, if our leaders had any sense of integrity.