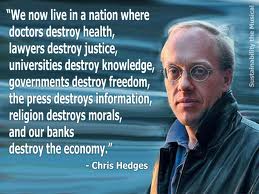 As the Liberal leadership races heat up -- in both Ottawa and Ontario -- those who consider themselves liberals should read what Chris Hedges wrote following the American election:

The ineffectiveness of the liberal class, as I saw in the former Yugoslavia and as was true in Weimar Germany, perpetuates a dangerous political paralysis. The longer the paralysis continues, the longer systems of power are unable to address the suffering and grievances of the masses, the more the formal mechanisms of power are reviled. The liberal establishment’s inability to defy corporate power, to stand up for its supposed liberal beliefs, means its inevitable disappearance, along with the disappearance of traditional liberal values. This, as history has amply pointed out, is the road to despotism. And we are further down that road than many care to admit.


If  federal and provincial Liberals chose leaders who practice junk politics, then liberalism is doomed. Hedges reminds his readers of what happened in Weimar Germany:

The historian Fritz Stern in “The Politics of Cultural Despair,” his book on the rise of fascism in Germany, warns repeatedly of the danger of a bankrupt liberalism. Stern, who sees the same dark, irrational forces at work today that he watched as a boy in Nazi Germany, argues that the spiritually and politically alienated are the prime recruits for a politics centered around cultural hatreds and personal resentments.

“They attacked liberalism,” Stern writes of the fascists emerging at the time in Germany, “because it seemed to them the principal premise of modern society; everything they dreaded seemed to spring from it; the bourgeois life, Manchesterism, materialism, parliament and the parties, the lack of political leadership. Even more, they sense in liberalism the source of all their inner sufferings. Theirs was a resentment of loneliness; their one desire was for a new faith, a new community of believers, a world with fixed standards and no doubts, a new national religion that would bind all Germans together. All this, liberalism denied. Hence, they hated liberalism, blamed it for making outcasts of them, for uprooting them from their imaginary past, and from their faith.”


What liberalism faces today is crisis of faith. Conservatism has been sowing doubt and cynicism for thirty years. Besides policies which will improve the lives of all Canadians, whoever is elected to lead both the federal and the provincial parties must again give Canadians a reason to believe that Liberalism stands for more than incoherent mush.

An excellent post, Owen, one with which I completely concur. I have been a big enthusiast of Hedges' work for the past several years, and while his jeremiads are frequently very disturbing, they need to be read widely.

It is hardly an accident, I think, that the Pulizer Prize winner and former New York Times reporter is mainly shunned by the MSM today, given that his withering insights spare no one. Although you are probably aware of this, he writes regularly for the alternative news site Truthdig.

Like you, Lorne, I have been following Hedges work for some time. He speaks truth to power and refuses to sugarcoat his message.

If we could inject just a tiny thread of Hedges insight into the political process, just think of how much further ahead we could be? I'm not confident that we're going to make much progress in Canada for at least another 15-20 years, the conservative brand has just been too successful at convincing Canadians that it's the right direction for the country. Unfortunately when the electorate wakes up, they're going to wonder what hit them. The telling issue I think is going to be an epidemic of poverty amongst seniors as more people lose or don't have access to company pensions, have no savings and riddled with chronic health issues. These unfortunately are going to be the same people that enabled the likes of harper, kenney and clement to be in positions of power.

I share your concern, waterboy -- and I'm frustrated, knowing that 61% of Canadians didn't vote for the present government.

Besides restoring faith in liberalism, the new leaders must get their voters to the polls.

Flaherty said. Conservatism is on the way out. Harper wasn't a Conservative in the first place.

Harper was Policy Chief for his, Northern Foundation Party of 1989. That's Harper's true government. The dots all connect, once you read about it.

We have a very poor number for, the younger generation turning up to vote. They hate the corruption, in the government. There is no point to vote. The election was cheated. Once a politician gets into office, they all lie like hell anyway. Their language was toned down. I think they are who Justin Trudeau will target.

However. Just you try and wake the electorate up. Good luck with that.

Waking the electorate up is the heart of the matter, Anon. As long as the majority of Canadians remains disengaged, Stephen Harper will do as he pleases.

Hedges comments are directly applicable to the LPC. The Libs don't grasp how much they lost when they turned their backs on the likes of Axworthy.

Harper's prime directive, and he's never shied away from it, has been to shift Canada's political centre well to the right.

Ignatieff, Layton and now Mulcair have been Harper's waterboys. Iggy shifted the Libs into Conservative-Lite. Layton/Mulcair transformed the New Democrats into Latter-Day-Libs. Everything has gone to the centre and centre-right.

The left has been abandoned just when we most need it to even Canada's political keel. The parties have become so compressed as to become nearly indistinguishable in many minds, those who have disengaged from politics entirely.

This political compression is highly dangerous for the future of Canada. It's tantamount to losing our political immune system and it leaves us defenceless against infectious blights like corporatism.

Want to wake up the electorate? Then speak to them of progressive reforms. Provide them with a vision that resonates with them and addresses their concerns for today and for their children. Talk to them about the environment, about the scourge of inequality in all its manifestations, about the restoration of democracy and how to wrest it from corporatism.

The Tories are utterly venal. The Liberals are a disgrace. The New Democrats an avaricious farce. And then we blame the public for apathy and indifference.

Excellent post Owen. The central political problem of our age is indeed very similar to the one that haunted the 1930s - how to we steer people away from the culture of cynicism and fear that the conservatives are peddling, and how do we fight a political class that has no problems with making their entire political program one that revolves around blatant lies?

I don't know the answer, but my instinct tells me that only when poverty is so large a problem that people can't avoid seeing the cause and when the true darkness of the rightwing is clear (as it became in the 40s) will the tide properly turn.

We have not arrived at this moment by accident, Mound. Our parties have tried to outdo each other at the same game and abandoned what the first President Bush called "the vision thing."

Lloyd Axworthy knew there was no place for him in Paul Martin's Party and went back to Winnipeg.

And that's when the party lost its way.

I'm afraid, Kirby, that Hedges is right. It will take people in the streets to change direction.

The danger, of course, is that things could get very nasty.

Owen, I don't believe that "liberalism" is synonymous with Liberals.
As one well knows, it is philosophy of life.
As for Lloyd and Paul Martin, well Libealism left the building with the majority govts of Chretien and con't.

I agree, Jan. The parties no longer espouse the philosophies that gave them their names -- just as the Conservatives really aren't conservative.

The problem, as Hedges suggests, is that the liberal elites have bought into the corporatist agenda.

They've all embraced corporatism, including the New Democrats in their quiet shuffle to centrism. I get a giggle when I read NDP stalwarts like Jan or Buckdog lambaste the LPC while their own party loses its moorings. In many ways the Layton/Mulcair NDP was indispensable in Harper's quest for majority. They snarl and snap when that's mentioned. I suppose it's traumatic realizing they're well on the road to becoming the very thing they so long reviled.

I never agreed with Rene Levesque, Mound. But there was a fierce directness to the man which I respected. So, when he referred to his former party as "the biggest whore house in the world," he got my attention.

It's easy for politicians to prostitute themselves. We've just seen Mitt Romney do it shamelessly.

Hedges is asking Liberals to recover their souls. Time will tell whether they have the courage to do it.