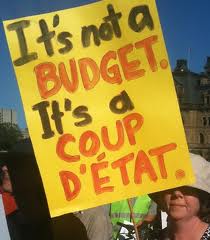 With Bill C-377, the Harper government has declared open war on labour. Tom Walkom writes in today's Toronto Star that:

To be precise, the target is the automatic check-off — also known as the Rand formula. Mandated by law in six provinces (including Ontario), it requires all employees in a bargaining unit that has democratically chosen a union to pay union dues.

It’s a particularly Canadian solution and is named after Ivan Rand, the Supreme Court justice who pioneered the idea in 1946.


The bill signals that Wisconsin governor Scott Walker's attack on labour has migrated north of the border. Ostensibly, the bill is about recovering tax revenues:

Finance department figures show that the tax exemption for union and professional dues does indeed cost the federal treasury $795 million in lost revenue annually. How much is attributed to unionists and how much to others unaffected by this bill, such as doctors and lawyers, is not stated.


The fact that the bill targets union workers and not others who benefit from the same tax exemptions is the key to understanding what the Harperites are trying to achieve. When Justice Rand devised his formula, he wrote: “The power of organized labour, the necessary co-partner of capital, must be available to address the balance of what is called social justice.”

The bill is all about removing labour as "the necessary co-partner of capital." It is another salvo in the corporatist juggernaut by a government which insists on transparency for native peoples and unions, but which also insists that it has no such obligation.

And the saddest part is, Owen, with misplaced public envy and antipathy toward unions extensive and deep, the Harperites will probably achieve their nefarious goal.

They have the votes, Lorne. But, like Rob Ford, they don't have the smarts.

Canada is a dictatorship, governed by a tyrant. Harper wants the same cheap labor pool as China's. To gain that cheap labor pool, he has to be rid of the Unions. Once the Unions are gone. Everyone can expect to be rehired, for a much lower wage.

This is what happened in BC. Gordon Campbell got rid of the especially trained Hospital housekeeping staff. He contracted out for Hospital cleaners. We now have Hospitals full of super bugs. There has been billions spent on patients having to be, readmitted for the super bug. I am one of those patients. I picked up the VRE super bug. As a retired Hospital Technician, I saw many breaks in technique of cleaning procedures.

Canada used to have high standards, for quality, safety, decency and honesty of ethics and morals. Now Canada's standards are becoming on par with, Honduras, The Congo, China and other corrupt, dishonest country's. Canada is made in China as well.

There is an old saying, Anon: The price is low because someone else is paying.

The Harper government's attack on labour is all about lowering the price of labour and thereby increasing corporate profits.

And those without leverage -- collective bargaining power -- will pay the price.