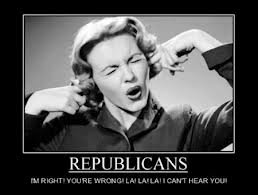 "Denial," Mark Twain wrote, "ain't just a river in Egypt." And so, as John Boehner insists that raising taxes on the rich is off the table -- and Obamacare must be on the table -- Republicans continue to live, Frank Rich writes,  in Fantasyland:

As GOP politicians and pundits pile on Romney in defeat, they often argue that he was done in by not being severely conservative enough; if only he’d let Ryan be Ryan, voters would have been won over by right-wing orthodoxy offering a clear-cut alternative to Obama’s alleged socialism. In truth, Romney was a perfect embodiment of the current GOP. As much as the Republican Party is a radical party, and a nearly all-white party, it has also become the Fantasyland Party. It’s an isolated and gated community impervious to any intrusions of reality from the “real America” it solipsistically claims to represent.


William F. Buckley used to say that he had devoted his life to keeping the crazies out of the GOP. But, now that the party is completely at the behest of America's right wing, the crazies are in charge. Their ascendance was underscored by a recent poll conducted by Right Wing News, which:

Perhaps the most memorable example of denial was Karl Rove's refusal to acknowledge the numbers from Ohio on election night. But he was not an outlier. He represents the Republican mainstream:

Nor, for all the panicked Republican talk about trying to make the party more inclusive and rational, is there any evidence that the GOP base wants to retreat a whit, whether on immigration or gay marriage or reproductive rights or the reinstatement of Jim Crow–era roadblocks to voting in states like Florida and Ohio. Or that any Republican leaders with actual power (as opposed to the out-of-office Jeb Bush) want to, either. The right is taking solace from exit-poll findings that more Americans still label themselves conservative than liberal and still think government does too much. A moderate putsch led by Olympia Snowe in exile, or David Frum, David Brooks, and Michael Gerson from op-ed pages, or Meghan ­McCain on Twitter, is not going to get very far.


Those who are presently in charge of the GOP would do well to remember the party they replaced -- the Whigs.  Political parties which can't deal with reality eventually die.

It may take a couple of more elections to have them realize their party died.

That's an interesting notion, Philip. The GOP -- the Zombie Party.

I totally agree with Philip. One or two more electoral cycles should do it, if the U.S. can weather it. It's time the Democrats made the reduction of the Republican Party their priority. It has to be put down.

If demographics is destiny, Mound, the Republicans would appear to be well on the way to sealing their own fate.

Facts do not persuade these folks.