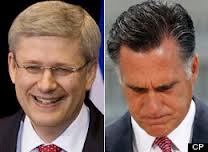 Haroon Siddiqui, in this morning's Toronto Star, points to the similarities between Stephen Harper and Mitt Romney -- who was rejected by 51% of American voters last week. Harper was rejected by 60% of Canadian voters, but he won the election:

That’s our parliamentary democracy. Still, it’s useful to remind ourselves of his policies that are not in sync with majority Canadian opinion but mesh with those of Romney and the Republicans.

He and they advocate smaller government and lower taxes, deficits and debts. But they believe in pork barrelling, milking government dry for their favoured projects. They also spend big on the military. That leads to bigger deficits and debts, as under George W. Bush and Harper (forcing the prime minister to now start cutting back on defence).

The Harper Conservatives and Romney Republicans don’t like gun controls or environmental regulations. They are oblivious to growing inequality. They treat adversaries as enemies — if you’re not with Harper, you are to be demonized, ideally destroyed.


Harper's ascendancy with 40% support is depressing, but not new. Those are the rules of the game. However, if there is a lesson to be learned from Obama's victory, it is that elections are still won on the ground. That comes down to knowing where the votes are and getting them to the polls.

That takes work. And the work starts today.

Email ThisBlogThis!Share to TwitterShare to FacebookShare to Pinterest
Labels: Harper and Romney

It is hard to compare two politicians when one has a track record and the other does not. In your article you are painting Romney with the Bush brush.

It would have been better to just compare American Republican views and Canadian Conservative views. Here there are differences and degree as well as kind reflecting the differences in our two National cultures.

Also, I am not sure Romney could put social issues so much a part of the extreme elements in the party, on the back burner, as Harper has. The cultural centers of our countries are quite different.

Historically, the cultural centres of both countries have been quite different, Philip.

What is deeply troubling about Mr. Harper is his admiration for things American -- particularly the American concept of the never ending and nasty political campaign.

It's true that slavery has never been at the centre of the Canadian experience. But, if anyone believes Canada is morally superior to the United States because people here were never declared "chattel," they obviously have not bothered to review the plight of Canada's native peoples.

Thanks for this Owen. It puts the lie - at least for the moment - to the argument from Lawrence Martin that Romney could have learned a lot from Harper.

Again, as I commented on that story a few days ago, it is the differences in the system which give us Stephen Harper...he (like Romney) would never have been elected in the US,

Sadly, Harper is using many of the same devices Romney used to solidify his power here in Canada.

What was, until recently, a fairly decent electoral system is rapidly succumbing to the corrosive effects of Harper's 'reforms'. What's badly needed here - as you point out - is a realization that Harper can ONLY be defeated if the 60% find a way to combine their efforts.

Absent that, we'll be stuck with him for a generation.

The thought of being stuck with Mr. H for a generation ought to be enough to mobilize that 60%, G.

In the last election, Harper and Co. knew where and how to tip the election in their favour -- including suppressing votes.