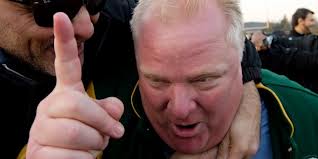 One of the ironies of a populist politician is that he is often a triumph of image over truth, the very thing he was elected to counter.

Before Ralph Klein was elected mayor of Calgary in 1980, he was a portly, rumpled television reporter who decried the “sleazy developers” who were ruining his city. He entered the race with little financial backing, and his campaign manager was a 25-year-old Keg waiter. Klein won handily in what was considered less a vote for him than a vote against the political establishment.

Before his first term was finished, the city planning department was effectively dismantled, and in the words of an urban planning professor, “anyone could build anything anywhere.” Klein became precisely what the voters had voted out; he became the establishment. Yet he was re-elected with 86 per cent of the vote.


And, like Klein,  Rob Ford is not the man he claims to be:

Ford is an insider, and while he may look and sound like the average voter, he shares few of their actual concerns, and none of their economic worries (his family company, DECO Labels and Tags, has estimated annual sales of $100 million).

His honesty is open to debate. When confronted with his drunken actions at a Maple Leaf game in 2006, Ford’s initial response was to emphatically lie (“This is unbelievable, I wasn’t even at the game”), as it was when confronted with his Florida pot bust (“When I say no, I mean never . . . Now I’m getting offended. No means no.”).

Ford pledged to make government more accountable and transparent, though when faced with a complaint from the integrity commissioner about using campaign funds to support a football charity, he responded by trying to eliminate her job.


And, of course, there was Marion Barry. He was known for his fractured English: “The contagious people of Washington have stood firm against diversity during this long period of increment weather.”  But, less comically, he had a habit of flagrantly breaking the law:

When Barry was videotaped smoking crack cocaine in a hotel room with a prostitute, his response was, “Bitch set me up.” At the time he had been mayor for 11 years. When he was released from prison after serving six months, he was re-elected to city council, and in 1994, became mayor once again. You knew where you stood with Marion.

Klein and Barry were elected more than once. One hopes that the good citizens of Toronto are smarter than the burghers of Calgary and Washington.
Posted by Owen Gray at 8:30 am

What you chronicle here, Owen, is a sad indictment of democracy as it is practised today. Until citizens learn to expect more, nothing will change.

As Gilmour says in his column, Lorne, putting Rob Ford in charge is the equivalent of making Homer Simpson the mayor of Toronto.

Someone has to say it. How dare you soil the good name of Homer Simpson.

You have a point, Anon. At least Homer doesn't pretend to be something he isn't.