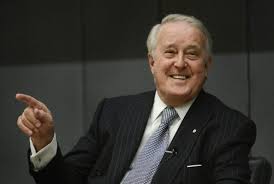 Brian Mulroney won the biggest majority in Canadian history. And he suffered the worst defeat. But, if you really want to know what happened to the Conservative Party under Stephen Harper, you should ponder the differences between the two men.

Andrew Cohen writes that, in a recent speech before the Albany Club, Mulroney spoke of what changes the Conservatives would have to make after Harper's departure. The first change had to do with trust:

Here is a former leader warning Conservatives that they will only return to power “when Canadians feel they are worthy of their trust, that we reflect their values and that we offer them a vision of Canada that is grand, generous and true.”

He calls for his co-religionists to adopt a tone that rejects “harshness,” that understands Canadians and projects confidence. This is a rejection, without directly saying so, of the small, mean and narrow politics of the last government.


Mulroney took his inspiration from  people who were not on the list of approved Conservative sources:

Mulroney buttressed his theme by citing Sir John A. Macdonald, the founder of his party. But Mulroney, knowing the properties of a good speech, is unafraid to quote from others, including Robert Kennedy, Theodore Sorensen and D’Arcy McGee. Heavens, he even cited Lester Pearson, whose good name John Baird and other Conservatives refused to utter.


And that was why Mulroney never underestimated Justin Trudeau:

He warned Conservatives publicly not to underestimate Justin Trudeau, which they did, and warned them privately that they would be defeated if they did not run a different campaign. He quietly predicted a Liberal majority 10 days before the election. He was right about his party and his country.


Mulroney made mistakes -- both in and out of office. But he is a much wiser man than Stephen Harper is or -- one suspects -- ever will be.

Email ThisBlogThis!Share to TwitterShare to FacebookShare to Pinterest
Labels: Mulroney On Harper

Harper is dogmatic.
Mulroney is pragmatic.

Both are greedy thugs.

There is much about Mulroney to dislike, Anon. But it's clear that he leaves behind a better legacy than Harper.

He had the smartz to git while the gittin' was good. I'll give him that. He took the money and ran.

Yes, let's have the, now, second most abhorred PM, who knifed a better young man in the back, who took brown bags of money and saw nothing wrong with that at the time, who was frequently referred to as "Lyin' Brian", who jumped ship when the going was good and left a shipwreck to Kim Campbell, tell Conservatives how they should pretend to be next time. A man who, if he were like most Canadians. wouldn't show his face again. It shows how egotistical politicians can get. Maybe he thinks it will bolster his daughter's chance at the leadership.

I agree that Mulroney was everything you say he was -- or is -- Jim. My point -- and Cohen's point -- is that, as prime minister, he was much better than Stephen Harper.

Absolutely true on both counts, thwap. But, as prime minister, Mulroney understood the essential character of Canadians. Harper thought he was the essential Canadian.

"he was much better than Stephen Harper."
better than the bitter scheming unraveller of everything canadian?
i cannot think of a single thing harper did that didn't decrease canada by a significant amount either by dividing or ostracizing or wasting or just outright betrayal and mismanagement.
mulroney might be better than the coin flipping monkey
but what an amazingly low bar to compare anything to

I understand how cynical Canadians are about Mulroney, lungta. Kim Campbell's defeat was essentially the last straw. But, on the other hand, Mulroney understood that Canada is a Big Tent. Harper lived in his own pup tent.

Owen, I agree with your assessment of Mulroney as far as his recent speech goes. What seems to be missing about any assessment of Harper made (to this point) is just how awful his leadership really was. I have finally finished reading Harris's "Party of One" and Kevin Pages's "Unaccountable" and they are thoroughly damning in their evidence.

Harper, (and his media supporters, I think of Ibbitson and Wells, particularly) face some tough appraisals. The myth of Mr. Harpers political skills and intelligence must finally die under the evidence of Election 2015. Hopefully, many of the insiders who would not speak on the record before (for example see "Party of One"), will now consider illuminating history. The remaining members of the party have certainly not shown themselves to be different from dear leader yet there is always a chance..... Change requires self-evaluation and the willingness to learn from mistakes, something his government rarely exhibited. Mr. Mulroney points that out nicely in his speech.

I don't think that Mulroney will make it to the pantheon of Canadian prime ministers, Asking. But I do think he understood the country much better than Harper did. And his analysis of what was wrong with the Harper government is spot on. The problem is that most of the people in Harper's caucus won't listen to Mulroney.

Harper is Mulroney's saving grace. Muldoon was fixed in purgatory desperately needing some Conservative even lower, more venal and utterly craven to come along to become the lightning rod catching the bolts of our contempt. Think about it. It's pure political alchemy. Who but Harper could ever make Mulroney appear benign? Life's a funny old thing, ain't it?

Harper made Mulroney look good. It was a favour for which Mulroney should be eternally grateful.

.. the Mound has it .. but not all of it..
We really do not know how extreme or radioactive
the supernova of Stephen Harper's falling star will be
Harper et al may attain Lucifer status at the whim of a whistleblower
in which case Mulroney ascends to the Hall of Fame of ex Prime Ministers

Having heard the Mulroney ''speech' as well as read the text of it twice
its really a crafty rubber chicken dinner hour thing.. in safe territory ..
Larded heavily with historic.. even hysterical quotes ..
It begs the question - who really wrote it .. ?
There's a crafty bit of 'code' salted throughout.. to winnow through
Admonishment - Advice - Legend Building (his own) - Political Posturing

Its the nature of the game I guess ..
the gussying up of self - the veiled shots at others - Exalted Status
In the vein of Mound's view .. payback ..
as we may never really know how scummy a thug like Harper
may have been to Mulroney via the shifty creeps of Reformatism
those faux conservative sellout evangel ReformaTory pagans & polipimps

That rant.. n all aside.. many many thanks for all the glowing heart missives
the links to.. and comments of many others like you ..
and look forward to your perspectives in 2016 ! !

It's safe to say that there was lots of bad blood between Harper and Mulroney, salamander. So it comes as no surprise that, while he was admonishing Harper, Mulroney was polishing his own buttons. Ego looms large in both men.

I look forward to your comments in the New Year.