A Powerful And Dangerous Illusion 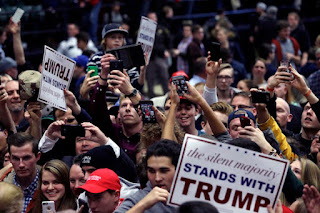 Carlos Osorio / AP
Chris Hedges writes that, in the United States, the corporate state has triumphed:

The seizure of political and economic power by corporations is unassailable. Who funds and manages our elections? Who writes our legislation and laws? Who determines our defense policies and vast military expenditures? Who is in charge of the Department of the Interior? The Department of Homeland Security? Our intelligence agencies? The Department of Agriculture? The Food and Drug Administration? The Department of Labor? The Federal Reserve? The mass media? Our systems of entertainment? Our prisons and schools? Who determines our trade and environmental policies? Who imposes austerity on the public while enabling the looting of the U.S. Treasury and the tax boycott by Wall Street? Who criminalizes dissent?


Donald Trump is the incarnation of the corporate state -- which maintains its authority by keeping the so called "silent majority" entertained and propagandized. The central message behind both conduits is fear:

The German psychoanalyst and sociologist Erich Fromm in his book “Escape From Freedom” explained the yearning of those who are rendered insignificant to “surrender their freedom.” Totalitarian systems, he pointed out, function like messianic religious cults.

“The frightened individual,” Fromm wrote, “seeks for somebody or something to tie his self to; he cannot bear to be his own individual self any longer, and he tries frantically to get rid of it and to feel security again by the elimination of this burden: the self.”


And, so, the frightened but entertained see Mr. Trump as their saviour. It's all an illusion, of course. But it's a powerful -- and a dangerous -- illusion.


Having read Krugman's warning today, Owen, Hedges observations leave me thinking of America as akin to Germany in the final months of the Nazi regime. Reality is displaced. The interests of the people discounted to irrelevance. The rise of the surveillance state and the militarization of all police services. Inequality running rampant with the privileged sequestered in gated communities like medieval lords behind their moats and massive stone walls. I think Hedges is right - it's a formula for revolt, one that may have consequences few can foresee.

It's a nasty, brittle thing that has evolved. How will it withstand the dislocative impacts of something as devastating as climate change? They're not that far off and they're beyond the power of those who have seized America to avoid. Let's hope they don't dream up ways of harnessing it to their purposes. Disaster Capitalism?

If there is a profit to be made, all else will become irrelevant, Mound. Trump has made a career of recovering from bankruptcy and letting others deal with the wreckage he created -- just like George W. Bush. Krugman is right. Trump is George W. on steroids.

When Bush Jr. ran for the presidency, I thought no way are Americans going to vote this man in. I was wrong. Yes the Supreme Court selected him, but there was no revolt from Americans regarding letting the Supreme Court select who their president should be. The second time he ran against Kerry, I thought there is no way Bush will get back in again,(I was somewhat naive then).I was wrong. I realize now that it is very possible that Trump could be president.It is only fitting that a business man whose success is based on bankruptcy and recovery, could very possibly become the leader of his intellectual and financially bankrupt country.Trump and the Absurdness of todays American politics fit like a hand and glove.

Absolutely, Pam. If Trump triumphs, it will be the Triumph of Absurdity.