Change -- One Way Or Another 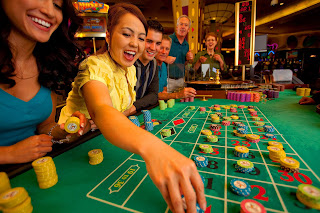 Things are wretched in Alberta. Unemployment is rising and real estate prices are sinking. Cheap oil has devastated the petro province. But, Mitchell Anderson writes, cheap oil could save the planet:

Most of the easily extracted oil deposits are long gone. What's left are high-cost, high-risk long-shots like the Alberta oil sands, deep water reservoirs off Brazil and drilling the high arctic. Companies hoping to profit from the last dregs of the petroleum age need to convince their investors to part with massive amounts of capital in hopes of competitive returns often decades down the road.

The wheels are now falling off that business case. Billions have already fled the Alberta oil sands in the last year as the global price of oil collapsed from over $100 per barrel to below $40. Shell recently announced it was writing off $4.1 billion on their failed arctic exploration program.

The planet gets thusly saved -- not at international confabs -- but in the boardrooms of fossil fuel companies increasingly unable to convince their investors to proceed with massively expensive and risky projects that might only be profitable dozens of financial quarters into the future.

And won't falling oil prices torpedo the nascent renewable energy sector? Perhaps in the past, but it's not so nascent anymore. Deutsche Bank recently released a study showing that solar generation costs will match or beat conventional fuels in 80 per cent of global markets in two years.

And because oil is primarily a transportation fuel, the bank believes ''oil prices do not have a material impact on solar demand.'' Their analyst Vishal Shah added, ''We believe the trend is clear: grid parity without subsidies is already here, increasing parity will occur, and solar penetration rates are set to ramp worldwide.''


For Alberta -- and Canada -- the conclusion is inescapable. We have spent the last decade putting all of our economic chips on oil. We have adopted Casino Capitalism. In a casino, you can win big for awhile. But, when you lose, you get taken to the cleaners.

If we don't change our economic model, we will be forced to change it.

Email ThisBlogThis!Share to TwitterShare to FacebookShare to Pinterest
Labels: The Consequences Of Cheap Oil

At least Casinos have rules Owen.

True, Anon. But they always favour the House.

Unfortunately "cheap oil" results not from resource or market forces but as the result of certain interests, Middle Eastern, flooding an already glutted world oil market. We're so awash in cheap oil now that world prices aren't expected to rebound until 2017. If we trust our salvation to ginned-up market players, we're in for no end of trouble.

As Herr Doktor Schellnhuber warns, nothing short of an "induced implosion" of the fossil fuel industry will prevent cataclysmic volumes of coal, oil and gas from being extracted and burned. If world governments will not act boldly and very soon, our fossil energy addiction will not be broken.

Mr. Anderson's "don't worry/be happy" message is anything but helpful. We know how little time we have remaining to effect what will be massive change. We know that, at a minimum, this will require that 80% of known fossil energy reserves be "stranded" or abandoned, left in the ground unburned. The vagaries of the markets will not accomplish that.

If we're serious about making this transition we ought to be identifying the highest-risk, highest-cost, highest-carbon fossil fuels and targeting the very worst for the earliest embargoes. I've not heard that suggested from our political caste, in Canada or any other nation.

No one yet has the courage to take on the oil barons, Mound. Anderson suggests, though, that -- at sometime in the future -- big oil may find itself an enemy of the people, just as big tobacco was a generation ago. The question is, can we wait a generation?

"The International Monetary Fund estimates that energy subsidies in Canada top an incredible $34 billion each year in direct support to producers and uncollected tax on externalized costs.

These figures are found in the appendix of a major report released last year estimating global energy subsidies at almost $2 trillion. The report estimated that eliminating the subsidies would reduce global carbon emissions by 13 per cent. The stunning statistics specific to this country remain almost completely unreported in Canadian media."

"Why do U.S. oil companies — some of the most profitable corporations on the planet — receive 20 to 40 billion dollars a year in subsidies from the U.S. government?"

Oil companies across the planet have received trillions yes trillions of dollars in subsidies across the board for destroying our planet. We are guilty all of us for using their dinosaur product oil gas and plastic. There is not a place you can go on earth where the destruction is not apparent. You think Antarctica is pristine? Think again:

Why are we rewarding these marauder's of life when all they care about is paper money and who they can enslave and destroy with it and the many temporal benefits money will give them? Look if in Canada alone if we took away the $34 billion we gave them as a gift annually we could kick start the green energy revolution overnight. How many of you have grandchildren? Write Just In Trudeau and tell him you want a better world for your offspring and give that $34 billion into the green energy revolution screw the oil barons they have been riding on our coat tails for way way way too long.

Oh and by the way does anyone know what a trillion dollar bailout looks like yearly?

My oh my what we could have done with that money. And Prince William Sound the Gulf of Mexico Africa et al might still be pristine...

These oil company owners and executives are the enemy of clean and healthy living into a bright future they stand in the way. Do you get that? We must all change rapidly to preserve this most beautiful planet in the universe we have discovered no other. We live in the magic kingdom paradise no less and we are trashing it.

Let us all make the New Years resolution: We will do this no more forever so our grand children can lead a happy healthy life and enjoy this wonderful place called Earth.

The oil companies have bought their way into our political parties, Mogs. And they intend to keep their seats at the table.

Ah yes Owen but we outnumber them, 'nuff said we are the majority they own the wealth we are the mass movement dedicated to restoring balance to this planet Earth.

Things can change, Mogs. But those who outnumber the oil barons are going to have to make their voices heard.