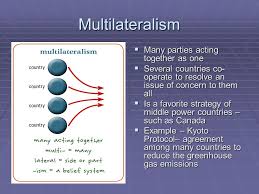 http://slideplayer.com/
Donald Trump and Stephen Harper may not have noticed, but multilateralism is back. Velma McColl writes:

In 2009, many claimed the chaos surrounding COP15 in Copenhagen marked the end of multilateralism — a fatal blow to the UN. It seemed to speak to the futility of trying to bridge so many interests, so many regional voting blocks, that no agreement could possibly be crafted to meet all the multilateral conditions for a global climate deal.

For many, it was a final proof, after years of experimentation and incremental successes, that national interests would always trump a global good, thwarting collective climate action into the foreseeable future. There was plenty of finger-pointing at governments, but also outside actors recognized that they had, perhaps inadvertently, undermined political will, contributing to the collapse.

Mr. Trump and Mr. Harper would like you to believe that the world doesn't work multilaterally. But what each man lacks is perspective:

Looking back, it is not surprising that countries were too deeply divided when they arrived in the Danish capital in 2009. It was likely naïve to expect otherwise. The world was dealing with the fallout of the economic crisis and the five key UN regions — Africa, Asia-Pacific, Eastern Europe, Latin America/Caribbean and Western Europe/other (including the U.S., Australia and New Zealand) — saw the next 10 to 20 years very differently. That’s not to mention the fact that countries like India, Brazil, South Africa and the other emerging players were already economically stronger than they were in 1995. In the same period, China became the world’s second-largest economy and the largest single greenhouse gas (GHG) emitter.


And each man refuses to acknowledge a glaring truth:

Looming over all climate negotiations is a concept, embedded in Kyoto, that the developed world is responsible for accumulated global GHG emissions in the atmosphere and should therefore act first and largely alone — represented by ‘common but differentiated responsibilities’ in the legal texts.

Acknowledging that truth meant acknowledging that developed countries would have to pony up funds to help poorer nations adapt to a warming world. The Paris Agreement put the financial framework in place. Multilateralism was back.

Let's hope it continues in the new year. Happy New Year to all.

Email ThisBlogThis!Share to TwitterShare to FacebookShare to Pinterest
Labels: Multilateralism

If the refugee crisis teaches us anything, it is surely that multilateralism is essential!

As the world's weather becomes increasingly volatile, Owen, one hopes that more and more people and countries realize how interconnected we truly are. Without the collective action that multilateralism requires, no one will be spared the worst that climate change has to offer.The recent disasters on the North American should serve as potent reminders of this fact.

Sorry, Owen, but Velma was just having a kumbaya moment. She's reading more in the Paris COP21 deal than what actually emerged. Non-mercantile multilateralism, especially environmental, has at its cornerstone sacrifice by the advantaged for the relief of the poor and vulnerable. We'll make gestures but they'll always fall ridiculously far short of anything meaningful. You'll know the epiphany has truly arrived by the star in the east and a sea change in the US Congress. Until then it's all turd polishing.

Given the current slate of Republican candidates, Mound, I fear you're right. Still, the Paris agreement offers a structure to deal with climate change. But the structure will be useless without political will.

I agree, Lorne. And, while we are no longer an outlier, I suspect that Mound is right. The ball is now in that court we call the U.S. Congress.