It's Not Just Racists. It's Racism. 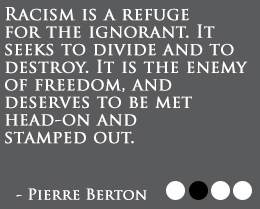 Last week, RCMP Commissioner Bob Paulson acknowledged that "there are racists in my police force." His frankness was long overdue. But, Julie Kaye and Beverley Jacobs write, Paulson's admission doesn't get to the real problem:

Paulson’s statement reinforces the false notion that there are merely “a few bad apples” in the force. There are a few bad apples, of course; as Grand Chief Doug Kelly, leader of the Sto:lo Tribal Council in British Columbia, said, “some of the worst racists carry a gun and they carry a badge.” But Paulson’s acknowledgement of the existence of racists in the RCMP fails to account for the systemic racism, sexism and violence underlying the relationship between policing and injustice towards Indigenous women in this country. It therefore fails to move us forward on the difficult path of reconciliation.


If the Commission On Murdered And Missing Aboriginal Women is to get to the heart of the matter, it will have to deal not just with racists but with the systematic racism in Canadian society. That is the only way forward to reconciliation:

Domestic violence is a serious problem in Canada for both Indigenous and non-Indigenous women. However, the RCMP’s decision to arbitrarily frame the crisis of missing and murdered women exclusively in terms of domestic violence ignores the disproportionate targeting of Indigenous women by strangers and obscures the context of colonial violence that Indigenous people must endure, as recently documented by the Truth and Reconciliation Commission on residential schools.

Reconciliation requires that Paulson account for the ways the RCMP implemented policies of residential schooling, removed Indigenous children from their families and communities, perpetuated sexualized violence and falsely blamed Indigenous persons for the crisis of missing and murdered Indigenous women. Ongoing mistrust in the “processes that exist” rightfully extends to Paulson and his office.


We have long looked down our noses at the United States for its systematic institutionalization of Jim Crow. It's time we looked at our own history and recognized how we too have institutionalized racism in Canada.

Holding the mirror up to ourselves is never pleasant, Owen, but is necessary if we are to truly move forward. Thanks for your post.

Any hope for improvement must be rooted in a clear-eyed assessment of the problem, Lorne.

If we remain silent about racism Owen , then the only voices we hear will be that of the racists.

Precisely, Pam. And, as Mr. Trump has proven, those voices can be very loud.