It's Time To Spend 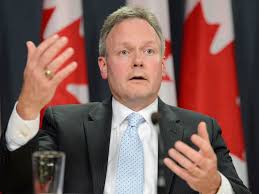 People scratched their heads this week when Bank of Canada governor Stephen Poloz announced that he was prepared to employ negative interests rates to prime the Canadian economy. What he was really saying, Tom Walkom writes, is that it's time for the Liberal government to spend:

But the more important lesson is his statement that this task could be better accomplished by the federal government running deficits.

Citing the late British economist John Maynard Keynes, the central bank chief reminded his audience that when interest rates are already low, fiscal policy (the willingness of governments to spend more than they take in) is always more powerful than monetary policy (attempts by central banks to promote investment).

In effect, he was telling Prime Minister Justin Trudeau and Finance Minister Bill Morneau to go for it — to run deficits if necessary in order to get the country working again.

In Switzerland, where the practice already exists, one commercial bank has served notice that it will start explicitly charging its depositors negative interest next year.

This means that those who insist on leaving their savings deposited in this particular bank could see them shrink bit by bit until nothing is left.

In Switzerland, you get a better return by investing your money, not by putting it in the bank. Poloz was saying that the fixation with deficits will not get Canada out of its economic slump.

It's time for some Keyensian economics.

lets hope this encourages canadian corporations that have been banking savings from their "harper tax reduction job creation plan" which has resulted in 1/3 of their total value being savings to breakout and create at least one new job.
i'm betting buying foreign companies is their better choice
for the average canadian ...what happened to us being all so in debt that we might never get out ?....meaning what savings?
whatever we had saved just took a hit of what? ...25% via the harper petro dollar reaching 75 cents anyway
what the hell does it matter if it looses another 1% in purchasing power?
next years projected spike in food prices is going to send a shudder down the spines of our lower class and induce major food insecurity for many
this will just be another happy ending servicing the rich people again

The game has been rigged for thirty years, lungta. The Liberals claim they're going to change the rules of the game. We'll see, won't we?

Several years ago Germany floated negative interest rate bonds and they sold out in a huge rush. Investors felt that parking their cash in the safety of German bonds was worth the minor loss.

Poloz and others have sent signals that the conventional wisdom of the last thirty-five years is crumbling, Mound.

There have been big deficits every year since 2008. I don't see how going even deeper into debt is the answer. At some that debt would become unsupportable.

What matters is the debt to GDP ratio, Hugh. If the economy grows, while the deficit shrinks, the debt can eventually disappear.

Then the GDP needs to grow every year, forever. Which is not possible.

Not necessarily, Hugh. What matters is the ratio of debt to GDP. Adjustments may have to be made to keep that ratio under control.