Much Harder To Bring To Fruition 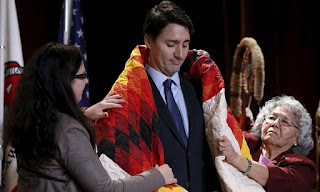 The Truth And Reconciliation Commission released its report on Tuesday. If all of its 94 recommendations are implemented, the way Canada is governed will radically change. Tom Walkom writes that some changes will be easy:

Such recommendations are politically easy. Provincial governments may be reluctant to spend money teaching aboriginal history. But they won’t oppose the idea outright.

Nor will any sensible politician oppose recommendations calling on government to improve the health of aboriginal people (although, again, some may balk at spending money).

Other changes, however, could result in pitched battles. For instance, the commission recommends that larger first nations be able to make "laws within their own communities." That's a very tall order. The recommendation suggests that

the whole nature of law should be rethought, first to integrate traditional aboriginal legal rules into Canadian practice and second to allow indigenous people “to become the law’s architects and interpreters where it applies to their collective rights and interests.”

That sounds a lot like a separate level of government and courts.

Email ThisBlogThis!Share to TwitterShare to FacebookShare to Pinterest
Labels: Trudeau And The First Nations

The First Nations should have their own parliament. And access to their own money.

The most "radical" of FN thinkers insist that they never surrendered all their autonomy to the British Crown. They have a pre-existing sovereignty that Canada needs to respect.

On the other hand, I remember a young FN woman who insisted that the Charter of Rights and Freedoms apply everywhere within Canada, saying she did not want to place herself at the mercy of some of the men in her community when it came to individual rights.

But pursuing a just relationship with the First Nations is going to require actions that some of us, many of us, will initially be uncomfortable with.

It's going to be a difficult road to travel, thwap. And Trudeau is going to have to do a lot of spade work to prepare the ground.

Actually, I think a two- or multiple-teared justice system is contrary to the Charter and not beneficial for anyone. It also opens the road to sharia-style courts because everyone will want their own tailored "justice" system.

On the contrary, the road to take would be to integrate First Nations principles into the existing justice system, making it better for everyone. This, of course, means consulting the First Nations to learn more about their approach (or approaches, as the case may be), overhauling a whole bunch of laws and creating new precedents. But it's doable if the political will exists.

The Supreme Court has been doing just that in some of its rulings over the last thirty years, Anon. Perhaps they will lead the way.