Nothing To Do With Justice 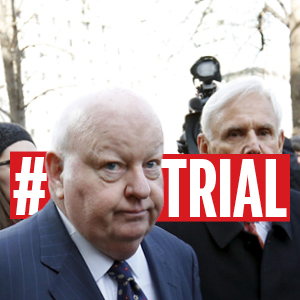 The prosecution and defence have finished the heavy stuff. All that's left for them to do is the closing arguments. So what have we learned from the Duffy trial? Michael Harris writes:

Lots of public figures are symbolically burned in public. But not many are hoisted in effigy in the nation’s capital as money-grubbing scoundrels floating high above the Ottawa River like evil genies.

Not many are denounced by their own boss and his stooges before their day in court. Not many face guilt by editorial before the allegations against them have been tested in court.


The exercise was all about throwing Mike Duffy under the bus with more than the usual flourish:

Harper’s animus against Duffy is easy to understand; the former PM didn’t like anyone in particular, except the guy in the shaving mirror, and Duffy had committed the high-crime of temporary insubordination.


But what's really troubling is the number of people who walked away unscathed:

Why wasn’t Ray Novak there to explain why both he and Nigel Wright advised Senator Duffy not to co-operate with the Deloitte audit? And why did the Senate shut Duffy down when he wanted to go before the Senate audit committee or the Deloitte auditors to answer their questions and provide documentation?

What was Senator David Tkachuk thinking when he leaked information out of the Senate’s forensic audit to people who were being scrutinized? On April 16, 2013 Tkachuk told Duffy that auditors had discovered per diem claims for a ten-day period while the P.E.I. senator was on a cruise in Florida. The Deloitte audit itself was not officially released until 13 days later on April 29, 2013. Tkachuk was co-chair of the Internal Economy Board.

Finally, what business did Harper’s PMO have ordering and getting the removal of certain paragraphs from a Senate report? Here is how former Senate Clerk Gary O’Brien put it to the RCMP: “… Obviously it was, that was a political decision, that’s a political decision.” As for the PMO’s advice to Duffy to not co-operate with Deloitte, O’Brien found that to be “inappropriate” — and why wouldn’t he?


Regardless of your opinion of Duffy, the trial had nothing to do with Justice.

Email ThisBlogThis!Share to TwitterShare to FacebookShare to Pinterest
Labels: The Duffy Trial

The sudden end to the crowns cross examination without any mention of the Nigel Wright payment says that it was all a farce, Owen.

It's interesting, Rural, that all evidence about "the bribe" has disappeared.

You're right Owen, the Duffy trial had nothing to do with justice and everything to do with Harper wanting to crush Duffy. I don't like Duffy, but I hope he get's off. The who debacle. from beginning to end has been a show case of Harpers malevolence. We all know what Harper thinks of Justice.

As soon as Duffy said that Harper told him " don't worry we'll take care of the money " all references to the bribe had to stop. Harper must have low friends in high places.

This has been a show trial, Pam -- the kind of thing that goes on in China.

It's been clear since the Chuck Cadman affair, rumley, that Harper has tried to use money to sink his opponents.

A dark farce. When the RCMP, that is to say Paulson, absolved Wright and everyone else who participated in the "Immaculata Bribe" it extinguished any doubt that this was a contrivance. Wright, jobless, had remained in Ottawa for month after month telling everyone who would listen (and they were legion) that he wasn't going down alone. If he was charged, he'd see the others in the dock with him presumably including Harper. His graceless bit of testimony as to how perhaps Ray Novak wasn't in the meeting at the very moment he discussed the under-the-table cash deal was Wright holding up his end of the deal. That much was blatant when Perrin next took the stand to say he was staring into Novak's face to discern his reaction when Wright spilled the beans.

Next up is Bayne's closing argument. I've read that the Crown might allow Bayne to go last which would be unusual. We'll see.

What still confounds me is that one can get charged with accepting a bribe while another does not get charged with offering a bribe. There are so many holes in this story if it was a boat it would have sunk to the bottom by now but it looks like Harper Novak and Wright get to fly away and be free never held accountable for their parts in this plot and the boys in short pants go snickering all the way home and they were main actors.

If nothing else, Mound, the trial has given us an inside look at Harper's organization -- who works and how they work. That insight should serve as a lesson for years to come.

The trial hasn't been about Duffy, Mogs. It's been about Harper and his entourage.

I liked Duffy most of the time and maybe what he did to embarrass Dion was heartless but Dion would not have been a good prime minister for other reasons.

Perhaps inadvertently, Duffy really was the key factor in bringing harper down, but somehow it seems worth the long wait considering the result.

I think Duffy will make a ton of money when he writes the final chapter of his sure to come book on harper and we will all like Mike again.

Who knows what will happen to "Ol Duff," ron? Something tells me, though, that his ghost will haunt Stephen Harper for a long time to come.

And even more the fact that the media has just played lip service to this fact. It still seems incomprehensible and a travesty of justice.