Senate Reform Will Be Slow 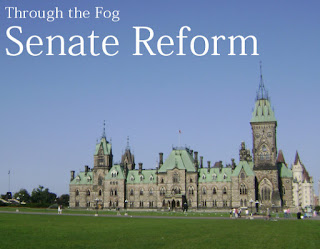 The Mike Duffy trial played a large role in the defeat of the Harper government. Dan Leger writes:

When the history of the 2015 election is written, the Duffy affair will be seen as a key factor in the downfall of the Harper Conservatives. The party that came to power off the back of the Liberal sponsorship scandal with claims of ethical purity and accountability was shown to be just as arrogant and corrupt as its bad old predecessors.

Before the election writs were even issued, Stephen Harper had been tainted by more than two years of bad publicity about the Senate and the people he appointed to sit there.

So instead of a smooth kickoff and a relentless march to victory, the early weeks of the Tory campaign were disrupted by the Duffy courtroom revelations. Harper’s talking points were overshadowed by trial evidence, given under oath, which laid bare how the schemers in his office tried to cover up the scandal.


More importantly, the trial has underscored how imperative it is to reform the Senate. But real reform would mean opening up the constitution -- and no one wants to do that. So reform will be piecemeal and it will be slow. The process has already begun:

Some steps have already been taken by the Senate itself, although arguably only at gunpoint. The rules have been clarified and tightened on expenses, travel and accommodations.

The Senate is also making itself somewhat more accountable by posting expenses online, so that we in the grateful Canadian public can see where our money is going.


And Justin Trudeau has proposed striking a committee which will submit candidates for consideration. But the real work will begin once the Duffy trial is over. The truth is that reforming the Senate will not be easy and it will take a longtime.

You probably heard Premier Clark saying that BC would not be participating in the PM’s new Senate appointment process.

Her stated reasons sound good but I wonder if this is really a matter of refusing to cooperate with Trudeau because he is Trudeau of the Liberal Party of Canada. The BC Libs are the heirs of the old Social Credit/ Conservative coalition and have no love for the LPC. Are we going to see, from BC at least, some of the Republican obstinacy we see in the US?

It seems that those Conservative Senators have learned nothing and continue to be obstructionists to any kind of change for the better, Owen
http://www.albertasenator.ca/hullabaloos/?article&599

Like their Republican cousins, Rural, they are The Party of No.

And it's pretty clear what the final fruit of that kind of obstinacy is, Toby -- Donald Trump.