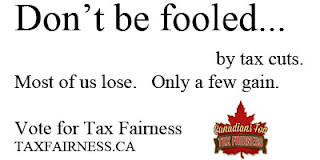 Murray Dobbin writes that there has been a palpable change in Ottawa -- a change which he applauds:

I feel the same relief as every other Canadian that public scientists can now speak their minds, that Harper's war-mongering is history, that we are overnight no longer a pariah on the world stage, that there is at least hope that Ottawa will take Aboriginal concerns seriously and that ministers with a passion for their portfolios are more likely to deliver the goods.


But those changes have been easy to make:

These are the low-hanging fruit of the "Canada is back" mantra because none of these initiatives cost much money. The only commitment so far to address the enormous social and other deficits racked up over two decades is a modest increase for the highest-income earners. Otherwise the cupboard is bare. And past Liberal governments, of course, helped make it so.


The real test for Justin Trudeau's government, Dobbins writes, will be whether of not it re-establishes tax fairness in Canada:

Their first test is on the table right now. I am referring to a report produced by the group Canadians for Tax Fairness (C4TF) (disclosure: I am on the board) detailing the extensive damage done to the Canada Revenue Agency (CRA) by the Harper government. The report is unprecedented in that it was produced with the enthusiastic co-operation of 28 (current and recently retired) tax auditors, fraud investigators and managers of the CRA. Many of them had approached the C4TF over recent years with revelations of Conservative efforts to weaken the agency's ability to collect revenue owed to the government. According to the report, the interviews revealed repeated themes:
In terms of lost revenue, the key finding was the government's systematic gutting of the tax division responsible for investigating offshore tax havens and recovering the revenue lost to the resulting tax evasion and avoidance. C4TF estimates that there is at least $199 billion in Canadian wealth hidden in tax havens around the world, resulting in the loss of up to $10 billion in revenue every year.


The Harperites were absolutely committed to making sure future governments could not recover from their decade in power. And the way they sought to ensure their legacy was to transform tax -- a three letter word -- into a four letter word. The proof of their success was recently illustrated by how quickly Finance Minister Bill Morneau backed off his musings about raising the GST.

But, to his credit, Morneau quickly changed the rules on tax dodging:

Morneau has already changed Canada's position regarding corporate tax dodging. The practice of transnational corporations transfer pricing and tax shifting -- shifting profits made in higher tax countries to low tax locations -- robs global governments of between $100 billion and $240 billion a year. The new government signed onto an international agreement negotiated by the OECD and the G20 called Base Erosion and Profit Shifting aimed at forcing corporations to pay taxes in the countries where the profits are actually made. Canada ranks as the third-largest loser in the G20 when it comes to the amount of untaxed corporate revenue.


It's a step in the right direction. But, on the issue of tax fairness, much more remains to be done.

We wonder, Owen, how much of those unpaid corporate (and 1%ers) taxes will be spent in finding new loopholes and / or lobbying in order to continue to cheat our government (and thus us) out of the money needed to bring us back from the brink. The low hanging fruit for the cra has thus far been the little guy whos contribution is minimal in comparison.

Little guys are easy to ignore, Rural -- until they rise up in revolt.

If it is a tax exemption now, the cost of employing someone to do lobbying should be removed from that list, immediately.


Fair taxation is one of a raft of reforms we need to recalibrate the relationship between corporations and government, as representative of the public interest. It is government's responsibility to regulate the eternal struggle between labour and capital and labour has been on the losing end for decades but never more so than the last.

Governments have allowed themselves to be trussed and fettered to the whims of globalization through the imposition of free market fundamentalism (as rational as Christian or Muslim fundamentalism) and the yielding of critical elements of state sovereignty through a toxic mesh of multi-national trade agreements. The result has not been what was promised by Reagan, Thatcher and Mulroney. It has indeed been toxic to the host societies and their once robust middle classes. It has failed us, completely, but we have been too timid to throw it out in favour of a number of more obvious modes of organization.

We need a progressive restoration yet around me I only see signs that we have been too cowed to reach for it. It takes courage to realize this sort of reformation.

Today we see inequality running rampant, populist demagoguery ascendant, liberal democracy in decline just as we're being hit with the impacts of early-onset climate change. Yes, tax reform is essential,but I'm not confident it can achieve very much except as part of a wholesale restructuring of government and society.

I agree we need a wholesale restructuring to meet the crises which are just ahead of us, Mound. But, so far, all we're hearing about is small ball.