The Return of The Just Society? 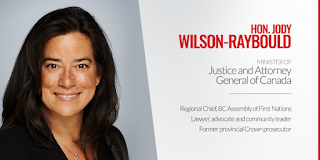 Yesterday, Justin Trudeau's Liberals took the first steps toward establishing an inquiry into murdered and missing Aboriginal Women. Those actions, and the mandate Trudeau has given his Minister of Justice -- Jody Wilson-Raybould -- are clear signs that Canadian justice policy has undergone a radical shift. Rosemary Cairns Way writes:

The mandate letter highlights the problem of the increasing incarceration rate of Indigenous Canadians (they represent 23 per cent of the federally incarcerated and just 4 per cent of the population), the overreliance on (and abuse of) solitary confinement in overcrowded and under-resourced federal correctional institutions (currently the subject of constitutional litigation in Ontario and British Columbia), and gaps in service for both Aboriginal Peoples and the mentally ill which plague the criminal justice system. The mandated review sends a very clear signal that the era of punitive and ideologically-driven criminal justice reform is over.


Under Stephen Harper, justice was all about punishment and victims rights. Focusing on the rights of victims -- particularly victims who are women -- is laudable:

Paying explicit attention to the needs of victims is always politically wise. It remains to be seen whether this commitment will have any real impact on how women victimized by violence experience the criminal justice system. The admission that the system is failing women is an essential first step.


But, unlike the perennial battle which has once again surfaced in the United States,

The Liberal platform on handguns and assault weapons is focused on tighter gun control and increasing restrictions on gun ownership. While it undoubtedly will be vigorously resisted by the gun lobby, it’s unlikely that the implementation of this policy will put the government at risk of being labelled “soft on crime,” a fate most governments are eager to avoid.


Most importantly, the fixation with punishment will fade:

The letter specifically identifies community safety and value-for-money as legitimate goals, suggesting that this government recognizes that putting more people in jail for longer periods of time is an expensive and ineffective way to keep the public safe. It is also a strategy which disproportionately targets the already vulnerable — something the previous Conservative government consistently refused to admit.


Perhaps we are witnessing the return of The Just Society.

There are a lot of people in jail who shouldn't be there and serve only to provide welfare jobs for guards. This has been an important core vote for the reformatories which has not made us any safer but has made us poorer, spiritually as well as financially.

Some people like to see themselves as emissaries of the Old Testament God, rumley, and they firmly believe that vengeance should be theirs.

We must accept the uncomfortable truth that racism, particularly against First Nations people, is the main reason for the long known imbalance in the legal statistics comparisons.

This imbalance has led to, or was led by, the perception that in some ways FN's are/were 'inferior' to the white population and our worst attributes surfaced to cause them harm.

The reasons or excuses for this are many and varied, but none have merit.

Sadly this public attitude has massive implications in the judiciary and most particularly on the front lines, the police.

Many police personnel are too easily inclined to pursue a FN person because of the social profiling that has been engendered by our culture and I believe create unnecessary incidents that eventually lead to wrongful arrest, detention and oftimes much worse. One only need research such incidents online to verify this suspicion.

A number of the MMIW's that found their way to the Picton farm were actually escorted there by members of various BC police forces.

Much has been written of late about the Surete' Quebec in their long time use and abuse of FN's women and girls and I doubt anyone could convince me this behaviour is confined to Quebec only.

Girls walking or hiking the infamous highway of tears in BC would, for various reasons, not likely refuse a 'lift' from an officer in a patrol car and fear for her safety at the same time.

FN's generally do not trust the police and an investigation into who was where on the night of the disappearance would yield surprising and uncomfortable results.

Unfortunately, this is a very old story, ron -- but it's also a very familiar story. It will finally get an airing. And we had better come to terms with what the facts tell us.

As the Trudeau government helps us to rediscover the values that have made Canada the country it is, Owen, and reminds us of our historical and contemporary shortcomings, all of us need to be vocal in support of those values. it is without question that those on the extreme right will try to offer roadblocks at every turn.

As Franklin Roosevelt told his supporters, Lorne, we have to push our leaders to do the right thing.

Ya know what I'm sorry but Just In was set up for failure. But you know what with his spending spree for infrastructure in Canada that was much derided will put many back to work and boost the Canadian economy. IMHO give him a chance...

My impression, Mogs, is that most Canadians are prepared to do just that.