The Ship Is Sinking 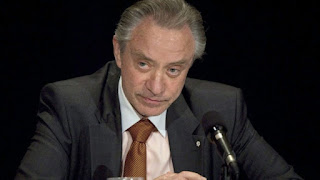 The Postmedia chain was in trouble when Conrad Black tried to convince Canadians -- and himself -- that he was the reincarnation of Lord Beaverbrook. Things have gotten worse since Paul Godfrey took over the chain. Andrew Mitrovica writes:

Postmedia’s recent litany of sins is a long one, and familiar to anyone who worries about the state of journalism in this country. Its Toronto-based head office managed to disgrace itself thoroughly during the recent election by forcing 16 of its major daily papers to run editorials endorsing Stephen Harper — a repeat of its disastrous mandated endorsement of the provincial Progressive Conservatives during the last Alberta provincial election.

Three days before the federal vote, the chain ran yellow front-page ads paid for by the federal Conservatives on most of its major dailies, warning Canadians of the awful risks of voting Liberal. Then there was National Post columnist Andrew Coyne’s surprising resignation as the Post’s op-ed editor just days before the vote — apparently because he was ordered to close ranks on the paper’s endorsement of Harper.

Bootlicking the party in power isn’t a long-term strategy to grow readership; its 12 leading dailies lost 179,868 paid subscribers in just the three years to the end of 2014, while its revenues dropped by about a quarter over the same period. The chain has continued to liquidate staff and consolidate operations as its business model implodes. And as the quality of the product continues to fall off, and as readers flee as a result, Godfrey carries on collecting at least $1.4 million per year for his work in squeezing out nickels and dimes for Postmedia’s hedge-fund ownership.

Earlier this month, The Globe and Mail’s media reporter, James Bradshaw, turned the knife on his newspaper’s chief rivals by noting that Standard & Poor’s had downgraded Postmedia Inc.’s credit rating “to the same grade ailing Greece.” Bradshaw pointed out that the downgrade was triggered by the credit agency’s warnings that “the newspaper company could struggle to refinance its high-interest debt” and that its capital structure was “unsustainable” in the long-term.


Like that other flagship of unregulated free market capitalism, SunNews, Postmedia is sinking.

If the media is the message its become a false messanger.

Simon and I use the same sources, Steve. And those sources show that the numbers eventually catch up to the spin.

"Bootlicking" is that not what the media is all about? Shame ballicking is more like it? Will they now come around to worship the house of Trudeau?

Let's hope not, Anon. Worship of one's elected leaders is not good for democracy.