A Call For A Change In Direction 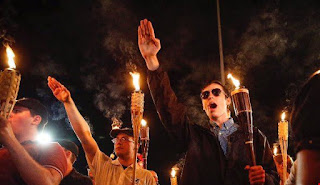 A UN committee charged with tackling racism has issued an “early warning” over conditions in the US and urged the Trump administration to “unequivocally and unconditionally” reject discrimination. The warning specifically refers to events in Charlottesville, Virginia, where the civil rights activist Heather Heyer was killed when a car crashed into a group of people protesting against a white nationalist rally. Such statements are usually issued by the UN committee on the elimination of racial discrimination (Cerd) over fears of ethnic or religious conflict. In the past decade, the committee has only issued six warnings. Those admonishments went to Burundi, Iraq, Ivory Coast, Kyrgyzstan and Nigeria.

You may have the impression that the ugliness in Charlottesville is something new. But those familiar with the history of the United States know that what happened in Virginia is as old as the Republic itself. The problem is that economic inequality brings out the worst in people. It rips a country's culture asunder:

Civilisations are undone in many ways, not all of them obvious. We tend to think of decline along military or economic lines but it is actually a nation’s culture, particularly in terms of equality, that determines its civilisational credentials. America’s descent into what looks like a full on race crisis is graphically dragging it down the “development” scale. Reality is closing in on the country’s exceptionalist self-perception.


In difficult times, the rights of minorities always come under attack:


The Trump Administration is following a well trodden path. The UN simply pointed that out -- and called for a change in direction.

Email ThisBlogThis!Share to TwitterShare to FacebookShare to Pinterest
Labels: A Rebuke From The UN

When you're in a privileged group, equality is a loss of status. Stoking resentment about "those people" who want to take away "our heritage" (i.e. privilege) is the stock in trade of white nationalists. The fact that Trump's speeches routinely carry these same themes encourages bigots to express publicly what they've kept private for fear of social disapproval. It's a worrying development that the UN is right to call out.

Now if only they would help people to accurately identify those actually responsible for their comparative loss of income and status...

All indications are, Cap, that -- on the matter of identifying those responsible for the loss of income and status -- Trump is dedicated to the Art of Obfuscation.

A warning from the UN about a rise in racism will be considered a badge of honour by those responsible for the rise.

The emporium has no one who wants to rent space at that mall. Societies based upon lies deception and corruption are the normal. The thing is the empires are like carbon fiber
strong structurally but can fall down easily upon significant impact.

We witnessed every institution knowing being totally corrupt. The tide of this wash
is still not addressed by any dike. We are being told shut up and sit down, and blame Russia.

Absolutely true, Dana. The UN's warning will be interpreted by those behind the hate as an indication of their own importance.

If that's what citizens choose to do, Steve -- sit down and shut up -- the juggernaut will continue.

Part of me wishes I could foresee where the "bottom" of this cultural degradation lies. Part of me is grateful that I cannot. Those whom the gods would destroy they first make mad only, this time, it's on a societal scale. Democracy, like most institutions, has a limited resilience that, especially in America, is being tested and it's unclear where the breaking point is.

It's easy to criticize Americans but Canadians also have lost sight of the fragility of our democracy, that democracy will always be under some measure of attack from those who have a vested interest in a different order, and that democracy demands vigilance and a selfless commitment of us to defend it.

I have been dismayed at the lack of interest generated in my writings calling for democratic restoration in Canada beginning with the restoration of a free press through the dismantling of the incredibly concentrated and narrow corporate media cartel. Despite the clear and prescient warnings of the Davey and Kent commissions into the mass media, this dangerous and pressing issue is not even on Trudeau's radar. He's already betrayed his promise of electoral reform and is doing nothing about social media manipulation technology that played a vital role in the "upset" outcomes of the last US election and the Brexit campaign. When it comes to the immediate government and the defence of Canadian democracy there is no one in the wheelhouse. Trudeau is leaving us all at the mercy of some very powerful and undemocratic interests.

No one pays much attention to Teddy Roosevelt these days, Mound. He was a wealthy man who understood how wealth corrupted politics. We would all do well to study his ideas -- particularly those expressed in his "Square Deal" speech.

The US has always admired Britain because they had the "Royal Family" that served to give stability to that country. In response, they developed a notion of the "kings' and "queens" of Hollywood that they could admire, enrich and view as their "royalties".

What has happened? they now have the Kardiashians and other innumerable no-name look alikes who just don't cut it! They no longer have that stability that the British royal family provided for the Brits.

What to do? Right, they put their future in the hands of a TV charlatan that shouts "your're fired" and pretends he is the richest of the rich. We all know that this is a guy that as financially stiffed so many, he is not even creditable, but still shouts to the rooftoops how rich he is and a "look at me" persona, that they have drunk the Koolaid. This is clearly a society that is completely enamoured with anyone who shouts to the heavens how successful he is, no matter what is really the truth. What will they do when some or even most of them discover that he is just another charlatan down at the carnival?

Memories from not so long ago:

The libertarians are laughing even harder now. Just put the right contents in the pot and let it stew. Stir as required for desired results. Or don't. If you get it right, it'll stir itself crazy.

I lived in Greensboro for a year a decade before the event mentioned in the article, John. There were people of good will there. But there were crazies, too. The crazies have always been there. Trump has given them reason to strut.