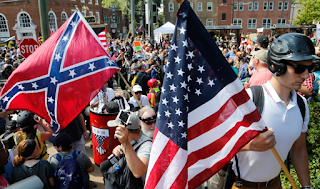 What happened in Charlottesville, Virginia this weekend provides a vivid reminder of who and what propelled Donald Trump into the White House. Michael Eric Dyson writes:

In attendance was white separatist David Duke, who declared that the alt-right unity fiasco “fulfills the promises of Donald Trump.” In the meantime, Mr. Trump responded by offering false equivalencies between white bigots and their protesters. His soft denunciations of hate ring hollow when he has white nationalist advisers like Steve Bannon and Stephen Miller whispering in his ear.


Their anger at the removal of a statue of Robert E. Lee is rooted in a misreading of American history -- a misreading which justifies a bigotocracy:

This bigotocracy overlooks fundamental facts about slavery in this country: that blacks were stolen from their African homeland to toil for no wages in American dirt. When black folk and others point that out, white bigots are aggrieved. They are especially offended when it is argued that slavery changed clothes during Reconstruction and got dressed up as freedom, only to keep menacing black folk as it did during Jim Crow. The bigotocracy is angry that slavery is seen as this nation’s original sin. And yet they remain depressingly and purposefully ignorant of what slavery was, how it happened, what it did to us, how it shaped race and the air and space between white and black folk, and the life and arc of white and black cultures.


They cling to a faded Southern aristocracy whose benefits — of alleged white superiority, and moral and intellectual supremacy — trickled down to ordinary whites. If they couldn’t drink from the cup of economic advantage that white elites tasted, at least they could sip what was left of a hateful ideology: at least they weren’t black. The renowned scholar W.E.B. Du Bois called this alleged sense of superiority the psychic wages of whiteness. President Lyndon Baines Johnson once argued, “If you can convince the lowest white man he’s better than the best colored man, he won’t notice you’re picking his pocket. Hell, give him somebody to look down on, and he’ll empty his pockets for you.”

We have a bigoted billionaire-cum-president who has done precious little for the white working class whose resentment fueled his rise. They have emptied their ethical and economic pockets in support of him even though he turned his back on them the moment he entered the Oval Office. The only remnant of his leadership they have to hold on to is the folklore of white nationalist sentiment, and xenophobic passion, that offer them psychic comfort if little financial stability.

William Faulkner understood that faded and corrupt dream very well. His novels are full of characters who are warped, violent and pathetic. It seems that not much has changed since his day -- except that today a Faulknerian character occupies the White House.

Image: Mother Jones
Posted by Owen Gray at 8:51 am

Email ThisBlogThis!Share to TwitterShare to FacebookShare to Pinterest
Labels: White Nationalists in Charlottesville

we take comfort in our myths and will never let them go. For example the Thatcher Reagan triumph is seen as a golden time, when really it was the true beginning of fake democracy.

It would appear, Steve, that lots pf people -- Trump included -- have trouble distinguishing between myth and reality.

A very appropriate quotation from Shakespeare, Anon. I only wish you had initialed your comment.


I saw a photo this morning of the guy who drove his car into that street full of protesters. It showed him early yesterday morning holding a shield in a line of fellow white supremacists. Their contingent was identified as belonging to Vanguard America. I went to Vanguard's web site and read their manifesto denouncing anyone who wasn't white, Christian and protestant.

Reading through the manifesto/screed I came across references to "cultural Marxism" a phrase I was sure I'd run into recently. It turned out it was a term used by Rich Higgins of the National Security Council in a memo he wrote for Donald Trump. The paranoid, xenophobic, racist memo landed on Trump's desk and it's said he loved it.

The new NSC chief, General H.R. McMaster also came across the Higgins memo and it triggered his purge of radicals from the NSC. When Trump learned that Higgins had been booted out he was infuriated.

What's now beyond question is that Trump is not only the beacon for white nationalism but these people are dispersed within his administration. Three of them - Bannon, Miller and Gorka are top Trump advisors. They have Trump's ear and they have his heart and mind. They got rid of Priebus and Spicer and now there's said to be a civil war to oust the generals.

Those torch-bearing swine at Charlottesville are merely the foot soldiers of a malignancy that has infiltrated the White House.

These people have been around for a long time, Mound. But they generally kept a low profile. Now they are at the centre of power. And, like you, I have read that they have McMaster in their sites.