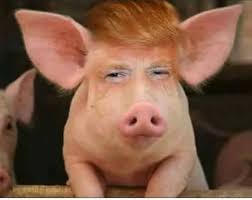 When John Kelly took over as Donald Trump's Chief of Staff, many hoped that he would impose much needed discipline on the president. Monday's reworking of Trump's initial statement on Charlottesville had Kelly's fingerprints all over it. But, yesterday, we witnessed yet again how long Mr. Trump can be disciplined. This morning's New York Times editorializes:

Gone was the measured tone that the president’s aides had talked him into on Monday, when he said “racism is evil” and appeared to distance himself from his earlier claims about shared responsibility for the violence. In its place was a high-decibel defense of his original position, to which he added the claim that while there were “bad people” and “very fine people” on both sides, the “very, very violent” protesters on the “alt-left” who came “charging in without a permit” were at least as culpable as the neo-Nazi protesters.

In so doing, Mr. Trump took up many of the talking points of the white nationalists and far-right activists who have been complaining that the news media and the political establishment do not pay enough attention to leftists who call themselves anti-fascists. He also sympathized with the demonstrators’ demand — the announced reason for their rally — that Robert E. Lee’s statue in a Charlottesville park be saved. “Is it George Washington next week? And is it Thomas Jefferson the week after?” However deep their flaws, though, Washington and Jefferson are memorialized as heroes of American freedom, whereas Lee symbolizes violent division. It was hardly a surprise, then, that David Duke, the former Ku Klux Klan leader, tweeted to thank the president for his “honesty & courage” in denouncing “leftist terrorists.”


Some are still trying to put lipstick on this pig. But yesterday confirmed that exercise is hopeless. And that Donald Trump is a very dangerous man.

I think the scene at the news conference here John Kelly is shown looking grim-faced and staring at the floor says all we need to know about this unhinged president, Owen.

I wonder, Lorne, if Kelly -- like those CEO's who are advising Trump -- will walk away from him.

Yes, as President of the United States, Trump is a dangerous man. He is ignorant, narcissistic, impulsive, irrational, maybe insane, and at the least, he has destroyed my faith in billionaires! His defense of the White Supremacist actions at Charlottesville is a case in point. However, his apparent support for Confederate memorabilia is justifiable in my opinion.
Of the many Confederate war heroes, General Lee is probably the one most esteemed by Americans regardless of whether they live North or South of the Mason-Dixon line. And rightly so. He was an important figure in American history, worthy of respect not because of the evil he defended (as part of defending Virginia's political freedom), but because of the kind of man he was. Should his images, or the images of other Confederates be removed from prominent display because they may serve as rallying points for White Supremacists? I don't think so.

What all of this shows, CD, is that Americans -- and certainly Mr. Trump -- are appallingly ignorant of their own history.

Cognitive Dissonance is hard to treat

I agree, Steve. And, in some cases, there's no hope.

Robert E. Lee? I'm generally suspicious of secessionists but who's to know?

Now about the "alt-left": I get it that they're throwing in the Black Lives Matter types, the ant-fascists (the "Anteefas") and miscellaneous standard old-time anarchists, but to what label are Trump and the alt-righters assigning their fellow anti-globalists in the Black Bloc?

I don't think that Lee was kindly, John. But he was recognized -- even by people on the other side -- as a man of integrity. General Grant had great respect for Lee. Remember, they knew each other at West Point. The trouble is that history is being simplified. And Neo-Nazis -- as well as Trump -- are forgetting history altogether.

Trump is getting what he wants, why he wants it see Sarajevo. Black leaders are calling for the removal of "slave Presidents"

John B its Control Left not Alt Left.

Trump seems to bring out the nasty in just about everybody, Steve.

Speaking of sessionists, Owen, wasn't it little Stevie Harper who proposed a wall be built around Alberta in order to keep non-conservative/reformers out?

The only time he found those who didn't have blue eyes and white skin like himself was when he could purchase their votes in large blocks in certain areas of Ontario and BC.

Harper was as cynical as Trump when it came to voters, Lulymay. After getting their votes, both men had no trouble in betraying large swaths of the voting public.