The Worst Is Yet To Come 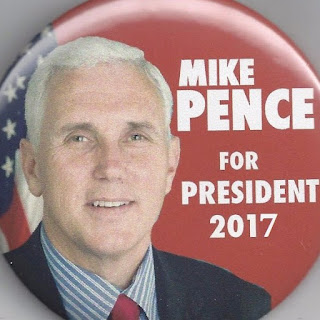 So you think that with Trump gone it will be morning in American again? Think again. Paul Mason writes:

The scenario being touted in Democrat circles is that Trump tries and fails to sack Mueller, one or more suspects gets immunity and the beans are spilled. Trump then either resigns or is impeached. Mike Pence becomes president. Only then do we get to know what the rightwing billionaires behind the project really want. Because Trump was never their first pick: for the first six months of his campaign, the main elite donor to the Trump campaign was Donald J Trump himself. It was only when the religious conservative Ted Cruz failed to ignite the masses that ultra-rightwing business money switched to Trump.


The Koch Brothers let it be known that they and their network weren't backing Trump:

Even then the Koch brothers, who have funded rightwing pressure groups to the tune of $400m (£307m), kept their distance until their ally Pence was installed as Trump’s running mate. If Pence becomes president it will be the true moment of revelation. All the 3am garbage tweeted by Trump, all the waffle that comes out of his mouth at rallies, will be seen as the surrealist prologue to the main event. But what is the main event?


Pence is where they want him -- poised to take over at the appropriate time: The Kochs and their confederates have two objectives:

One, most clearly associated with the Koch brothers, is best described by its adopted euphemism: “income defence”. It sees every dollar of the US’s $19tn debt as a future claim on the profits of private enterprise; it wants low taxation and – as Trump backer Robert Mercer is once reported to have said – a state “shrunken down to the size of a pinhead”

The other side of far-right ideology, by contrast, wants a repressive state, imposed conservative social norms and – if necessary – an eviscerated constitution to achieve it. If we analyse Trump through his actions, rather than his garbled words, it is political illiberalism that has won out during the first seven months of his presidency. When a judge blocked his Muslim immigration ban, he attacked the judiciary’s constitutional role. When the press revealed malfeasance, he labelled them “enemies of the American people”. When James Comey refused Trump’s appeals for “loyalty”, he was sacked.

Pence has long stood for those two objectives. And he's willing to drive full bore to achieve them. The worst is yet to come.


I just don't see a "post-Trump" Congressional GOP being willing to throw what remains of their credibility and political capital away on another radical, Pence. Mid-terms are just a year and a bit off and the mood of the electorate in November, 2018 could be decisive to Republican fortunes and, possibly, recalibration. There's a lot of musing these days about Pence reprising the role of Gerald Ford, a caretaker.

Were Trump to be removed in disgrace it's hard to imagine Pence emerging unsullied. It's also hard to imagine him annointed as his party's nominee in the 2020 election. Chances are he'd face a tough challenge in the primaries.

Then again I didn't "see" a Trump victory either. Strange times.

IMOH Pence is way worse than Trump. He could never be elected but sure to be selected. The face of the American Taliban. God save us.

It's true that Ford wasn't elected in his own right, Mound. The same fate might await Pence. But, if Trump resigns or his impeached, Pence could be the caretaker who'd take care of business. He could do a lot of damage in the time he had left.

As I wrote to Mound, Steve, I worry about the damage Pence could do if he served out the rest of Trump's first term.

Pence is the present day incarnation of the Herbert W and Garner Ted Armstrong school of thought, The Wonderful World Tomorrow. So far as I can remember from my university days when I couldn't believe the local station ran this horse-manure between Top Ten sessions, a final war will be fought on some Middle East plain between the Christians and the unenlightened. The Christians will have a tough go of it, so that Hallelujah! the Lord Jesus Christ will descend from heaven and smite the bad guys.

So that's all right then. No more explanation needed.

Meanwhile back on Earth, ole Mike turned Indiana into a right-to-work state, the usual right-wing turn-it-on-its-head rhetoric where average doinks can work in a union shop without paying dues. Because freedom. And if they live long enough afterwards when their brothers count the dues and figure out who the freeloaders are.

But wait, there's more! As governor, Pence faced national scorn and was forced to backpedal after he signed the Religious Freedom Restoration Act, allowing businesses to deny services based on religious belief. Oh yeah. There's a thinkin' man with an open heart. Defunding Planned Parenthood. "In the second half of his term, he caught flack for his efforts to stop the resettlement of Syrian refugees in Indiana (which were eventually rebuffed by two separate federal judges), for his support for legislation that limited abortions, and for attempting to curb the power of his state’s publicly elected superintendent of public instruction, Democrat Glenda Ritz."

Why yes, ever'one knows that Darwin was the anti-Christ.

Damned if you do, damned if you don't. Trump or Pence. Now if Killery had got in, all those foreign countries that refused to bow in fealty to the US would've been carpet-bombed already for being stupid and wanting to be self-governing for reasons that escape the American mentality. She had a go at Libya and cackled about it under Obama as to the way Khadafy was uh, murdered with a hot poker. Such a great gal with only one personal ambition - be Prez. Other than that, well business rules. The PNAC directives for the exceptional and indispensable USA must be followed. A sociopath to the core.

Yeah there's no current choice for a rational leader for the US right now. Trouble is, the rest of us poor suckers have to put up with all this shit whether we like it or not.

And, given Trump's recent comments on North Korea, BM, it will be more of the same -- with a touch of the Armstrong Apocalypse thrown in for good measure.