There's Now Only One Objective 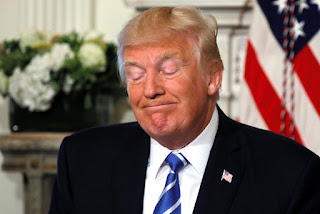 Donald Trump's opponents are outraged -- as they should be. But Trump is the Master of Distraction. One outrage is rapidly followed by another. He constantly shifts the focus of his critics. Jonathan Freedland writes:

If Trump succeeds in moving past Charlottesville, it won’t only be thanks to an unavoidable process of attrition that has worn liberals down. I’m afraid Trump’s opponents made a tactical error. He wanted to change the subject to the question of Confederate statues – and they let him. Days after those violent clashes had seen an antiracist protester murdered, the national conversation centred not on that act of terrorism but on which historical figures should be remembered, and how.

Make no mistake, that’s an important argument. But it is inevitably a nuanced one that, as we have seen in Britain too, divides liberal opinion. Two people, equally fervent in their loathing of racism, might disagree on whether it’s better to remove a monument, or keep it as a reminder of a shaming past. And there will never be an easy consensus on where to draw the line. If owning slaves is the key criterion, should the statues of George Washington and Thomas Jefferson come down too?

Trump’s opponents have spent much of the past two weeks talking about Confederate generals and US history, when they should have maintained a laser focus on the key and shocking point: that an American president spoke with sympathy and admiration for neo-Nazis; that he put these fascists on a moral par with those who oppose them; and that he was more animated in condemning what he called the alt-left than he ever was in lambasting those who parroted the slogans of the KKK, who brandished the symbols of white supremacism and who chanted: “Jews will not replace us.”

I doubt that this is a conscious strategy on Trump's part. His brain is simply too chaotic to arrive at such a strategy on its own. But it's that chaotic brain which has enabled him to survive and to shift responsibility for his actions on to others.

Trump's latest outrage is issuing a pardon for Sheriff Joe Arpaio. The implications for the rule of law in the United States are ominous.

All of the outrages add up to one indisputable conclusion. Trump has no respect -- for the law, for history, for those he claims to represent. So now it is time to focus on one objective -- removing them from office.

Image: Newsweek
Posted by Owen Gray at 9:29 am

Email ThisBlogThis!Share to TwitterShare to FacebookShare to Pinterest
Labels: The Master Of Distraction

The constant distractions may or may not be a conscious strategy on Trump's part, but it is a well-established pattern of authoritarian control that Gary Kasparov refers to as Autocratic Distraction. In other words, "Who do my supporters hate? Who can I get them to hate? How can I make the hated targets angry so they lash out?"

This strategy disrupts the opposition and prevents them from focusing on the consolidation of power and destruction of the rule of law that's also going on. When every day brings a new outrage, it's hard to stay focused for long. What we're seeing is very dangerous and it's a fatal mistake to underestimate Trump or to write him off as a deranged narcissist. Trump wants what his party wants: authoritarian control.

surfing on the winds of hate and greed

produced many champions for centuries
indeed

It's interesting that Kasparov shows an understanding of what's going on, Cap. Despite all of Trump's denials, Trump and Putin are soulmates.

Hate and greed produce all kinds of dividends, Steve. And they all add up to moral bankruptcy.


This may not have been as much a conscious decision, a strategy, as an instinctive act of a man who has made a fortune from duplicity, deception and distraction. These are behaviours he's used before to best municipalities, including the city of New York; major institutional lenders, including prominent American banks; contractors and suppliers; and, most of all, Trump's investors. Everyone connected with him is left holding the bag, left to recover pennies on the dollar at best, from bankrupt companies, while Trump walked away with tens, hundreds of millions. Then, when his supply of domestic suckers dried up, Trump had to go for money from sketchy Russian types. One thing we can probably count on is that he didn't screw those characters as he did his American creditors.

In any event, Trump is a very seasoned grifter. He shows this almost every day in so many ways. He's gotten to the point where he lies when telling the truth would be to his advantage. He lies as effortlessly as he breathes. He lies without regard to the implausibility of his claims knowing that, to his base, that doesn't matter. He lies so pathologically and then gets away with branding the media "fake news." This is indeed "post-truth America" and it's the perfect, perhaps only milieu in which a chronic grifter and deeply unstable narcissist could become president and be handed the nuclear launch codes.

You've hit upon the essential truth about Trump, Mound. He's a grifter par excellence. And -- from the beginning of his career until now -- there have always been enough suckers to keep him afloat.

" a chronic grifter and deeply unstable narcissist" could also be a definition of the country itself since the post-Vietnam years.

As you've pointed out before, Dana, Trump's supporters believe he can do no wrong. Perhaps that's because, when they look at Trump, they see themselves.

.. we saw an earlier variation of this.. the diseased political animal - via Stephen Harper.. A coherent journalist could certainly list and track the daily lies deceptions and crimes against environment etc etc.. but citizens of Canada's eyes glazed over due to the daily barrage. I'll never forget him denying his droning 'quip' to Mansbridge about Missing Indigenous Women.. not being on his radar. Claimed later he never said that. That it was recorded on video, plain as day, meant nothing.. just lie every day.

'Politician' posturing, broken election promises, grooming gaming or gooning the citizenry, or sheer buffoonery are becoming commonplace, as is the current trend to provide zero attempt at being an accountable a public servant. Trump of course will go down as one of the most astonishing political failures in history. Yet he's a perfect reflection of the resounding failure the United States has evolved to.. ie the onset of lunacy and insanity. Fabulously wealthy freaks and creeps such as Alex Jones, Newt Gingrich, Sarah Palin et al.. the rise of neo nazis and white supremacists.. the sheer greed of the Koch brothers.. the endless wars.. without evening 'winning' .. much less explaining what the so called purpose is / TS

It's all become a play from the Theatre of the Absurd, salamander. Insanity is the order of the day. And it goes on -- day after day.