The Uglist American Of All 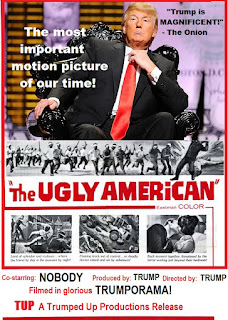 Russian Roulette is title of a best selling book about Donald Trump by David Corn and Michael Isikoff. Former American Ambassador Bruce Heyman writes that Trump is playing the same game with Canada. Heyman puts the relationship between Canada and the United States into perspective:

With a border of 5,525 miles, the US and Canada share the world’s longest unmilitarized border and also boast the largest balanced bilateral trade relationship; Canada-US annual trade exceeds $630bn in goods and services. Thirty-five US states have Canada as their largest export market and most of the remaining have it as their number two. Canadian soldiers have sacrificed their lives right next to American soldiers in Afghanistan, the Persian Gulf, Kosovo, Korea, and both world wars. After September 11, the people of Gander, Newfoundland, opened their homes to thousands of travelers stranded when we closed US airspace. This heart-warming story is told in, Come From Away, the hit Broadway show. We jointly protect North America through Norad and together protect Europe through Nato. Canada is our neighbor and friend, and our relationship demonstrates how diplomatic and economic friendship provides strong geopolitical stability.


A president who understood that relationship would not do what Trump is doing -- even for reasons of self preservation. It's clear that Trump glories in making enemies, while failing to understand that he is his own worst enemy:

There isn’t a relationship in the world more important to the United States than Canada, but Washington’s recent behavior is cause for alarm.

Trump has persistently tested this friendship over the past year and a half. The trouble started when we withdrew from  and signaled to Canada that the administration was willing not only to sacrifice our commitments but also our environmental future for empty political points.

Our bilateral relationship has been further strained by the travel bans, the Daca decision (over which a dangerous and cruel wave of uncertainty still looms), and the erratic behavior of customs agents. Our reckless approach to immigration has caused a number of refugees to flee the United States to Canada, putting a strain on their resources from coast to coast, but especially in Quebec.


Everything he has done since displays Trump's profound ignorance. He blames Canada and Mexico for the loss of American jobs, but he's too thick to analyze the real cause of that job loss:

The president is prioritizing political tactics over economic strategy, threatening our friendship and potentially millions of American jobs just because he won’t do the hard work that the office of the presidency requires. The administration is using Nafta as a scapegoat for the real problem of jobs lost through technological advancements.


Put simply, the president is intellectually lazy and consequently stupid. Those two characteristics define The Ugly American. Trump is the Ugliest American Of Them All.

The Americans did a wonderful job in choosing Trump to make them great again, and in continuing to support his endeavour to do it. I guess they must recognize how wonderful it is to be represented by a man who so clearly embodies a stereotype which the rest of the world has come to know as the "ugly American". This is a wonderful state of affairs for the USA which will surely lead to their recovery of that old "greatness.

Yes, CD. The irony is delicious.


Chaos reigns, Owen. What we don't know is when, or how, this ends. For months several leading economists have been warning that the world is on the cusp of a hit to the global economy that will eclipse the Great Recession of 2007-2008. If they're right I can't imagine that Trump's irrational antics won't precipitate or exacerbate such a crisis.

So far, Mound, the crises Trump has faced have been self generated. And he doesn't know how to solve them. God help us if he has to face a crisis caused by forces beyond himself.

Whatever the crisis, that perpetual whiner will find someone or something else to blame for his inability to deal with it. The finger's always at the ready. And his supporters will buy it. I wanted to stop hoping for the Maple Leafs years ago, but I'd acquired too many hats and souvenir glasses and mouthed off a few too many times to consider quitting the team.

I remember the last time Punch Imlach and the Leafs won the cup, John. Their fans continue to hang on. I hope Trump's fans have a lot less staying power.