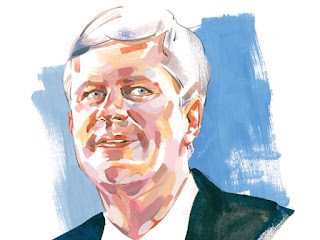 Stephen Harper has written a new book in which he dons the mantle of populism. Andrew Coyne is not impressed:

Well now we have it from the proverbial horse’s mouth. The young firebrand who famously deserted Preston Manning for being too populist and not enough of a conservative now claims the mantle of populism for himself: if not as a whole-hearted adherent, then as the statesman who understands where others only condemn. His new book Right Here, Right Now, is indeed in large part an attempt to portray his own government, not as the cynical power-seeking machine it appeared to be, but as populist before its time. In defending populism, he defends himself.

And yet the mind it reveals is not that of the subtle, sometimes rueful voice of experience he clearly wishes the reader to imagine. It is, rather, all too conventional, even banal. What are presented as iconoclastic insights, in which the rise of populism is explained in terms of the failings of conservatism — former Conservative prime minister breaks with decades of conservative orthodoxy! — are a mix of received wisdom and undergraduate shibboleths, many of them long debunked.


Harper hasn't changed. He remains the same neo-liberal mouthpiece he always was, repeating the tired -- and untrue mantras -- first espoused by Margaret Thatcher and Ronald Reagan. He claims that Donald Trump's supporters are the economically disenfranchised. But that simply isn't true:

Rather, opinion research has shown, they are driven primarily by cultural resentments and racial fears: resentment of educated elites and their media allies, who are accused (not without justice) of looking down their noses at the people in “flyover country”; fears of losing their place in a society that is rapidly changing. That Trump was adept at tapping into those resentments is not in doubt, but it is less a matter of his superior insight or willingness to challenge conventional wisdom on matters such as trade, as Harper seems to imagine, than unprecedented, unimaginable shamelessness.

So, too, Harper misrepresents populism, certainly of the kind that Trump and his ilk practice. It is simply wrong to describe it, as he does, as “any political movement that places the wider interests of the common people ahead of the special interests of the privileged few.” Indeed, as he himself acknowledges, “every political party tends to frame its core appeal in such terms.” A definition that could describe any party or movement is without significance.

Rather, the term describes a view of “the people” as being under siege: if the populist is famously “for the people,” it invites the question of who is against — the Them that is supposedly menacing Us. The populist is never short of Thems: elites, foreigners, racial minorities, “globalists” — or in Harper’s (borrowed) formulation, the cosmopolitan “Anywheres” who owe no allegiance to nation-states, move between homes in New York, London and Singapore, and hanker after a world without borders: a description that would apply to perhaps dozens of people but whom Harper is convinced now control “all the main traditional political parties.”


It's the same witches' brew that Doug Ford is selling. It's politics of by and for the wealthy. And it's a lie. Perhaps that's why the media was uninvited to the book launch at the Canadian Club.

Stevie has always sold lies. Why do people pay any attention to him? I suspect that, like religion, the lies are more comfortable than the lives than many people actually live.

Delusions can be very comfortable, Toby -- until the truth burns down the lie.


A visit from Harper is very similar to the periodic return of Dick Cheney inevitably defending the Bush brainfart to conquer Iraq.

Harper plainly fears his irrelevance, something that necessarily deepens with the passage of time. He brought no vision to Canada. His former BFF, Tom Flanagan, gave an address to some dowager Tories on Saltspring Island at which he said that Harper eschewed vision. Absent vision, Harper chose the role of petit fonctionnaire, an administrative technocrat whose guide to governance was actually some old and discredited economics text.

So, having given us nothing to remember him by he writes a book if only to create some narrative he can cling to. That's not uncommon for low-order leaders run out of town by a mob wielding tar buckets and feathers.

I suspect, Mound, that historians will view Harper as a 21st Century Arthur Meighen, and they'll as, "Who was that masked man?"

.. the disaster that was Stephen Harper et al.. was marked by daily deceit - no different than the GOP of the time and of today.. or the disaster that is Donald Trump, the front man for the Republican scumbags & 1%. So many similarities. Just lie daily and who can keep up or condense it ?

The best one can do today is be sure each lie, fallacy, failure is nailed down as rock solid 'History'. And detail them as succinctly as possible. Will choose one example at random. How about his practice of sending the late 'Saint' Jim Flaherty off to conduct an annual weekend 'retreat' with the CEO's or senior execs of all the major corporate entities, mainly foreign owned, operating in Canada? What transpired was Flahery gathering the wish lists of all concerned & Harper converted them into legislation. Repealing existing legislation as required.. and in his final majority term, why he just buried his legislation within 400 + page omnibus bills.

Now when your examine how he did this, its important to note how Harper was 'seeding' judicial appointments as well as senators.. AND weak federal Ministers.. Thus the constant attacks upon Environment were well buttressed on multiple levels.. and designed to protect or implement his 'visions' not the public's needs, dreams or wishes

Personally, I believe Harper was taking selective pages from Ghengis Khan's 'long game' of war. Ghengis sent out powerful cadres to burn forests, selected farmlands, and weaken tribal chiefs.. such that his vast hordes had pathways of green grass as his expansions the following year or years and territory conquering which relied on astonishing numbers of horses. Old style military conquests ran on their warriors stomachs and those of their mounts. So there were cattle and game also seeded along his path.

Of course he also killed male children taller than a wagon wheel's center hub. And he wisely steered clear of interfering with the local religions or beliefs. He collected and protected the greatest astronomers, mathematicians, engineers, philosophers, ensured education, science, music and arts were supported.. so perhaps we can see where Harper cherry picked ideas, ignored or discouraged others !

That's an interesting comparison, sal -- Harper and Ghengis Khan. It's one that never occured to me. But given Harper's scorched earth approach to many issues, I see where you're going. In the end, both men -- and Donald Trump, too -- were and are about personal aggrandizement.


"Despite his best efforts to sound impartial on this topic, there is an elephant in the room that Harper never addresses: the polarized state of Canadian politics is in no small part a legacy of his government." - Don Lenihan

Thanks for the link, kt. Lenihan is right. Harper has always been about pumping up his base -- and appealing to their basest instincts.

i suggest someone get stevie up in a long dress, wrap a scarf around his head and set him loose on the mean streets of Alberta. He'll soon learn what populists devoid of brains think of that darn foreigner sponging off the government. "We got enuff immigrants!" In fact add Kenney as stevie's girlfriend. Those two idiots have zero comprehension of life on the street - all they want to do is rip down what society has built up, claiming the usual BS that the free market solves everything, even social issues. Sloganeering is about as much vision as Cons ever have, beyond belonging to Institutes that are funded by oligarchs intent on completely picking our pockets while keeping their fake prophets in minor clover. A pox on these enemies of real people and their constant blah, blah, blah, rugged individualism, blah, blah, get a job, blah, blah, stop sponging off society, blah, blah, private schools need public funding as a right, blah, blah. Fed up with it all. Apparently the desire for power keeps them from not getting bored stiff completely out of their tiny minds repeating utter rubbish over and over and over again till they're blue in the face as well as in spirit.

Only some old white man can write the twaddle harper peddles and expect to get away with it. An intellect of some reknown he is not. Just the opposite - trained as an economist, eh? And if you laid those guys end to end, you'd never reach a conclusion. A repeatable science it is not, so no claiming respectability there, stevie, old son. You're better at writing hockey books and singing off key.

I agree BM. Steve and Jason have made comfortable livings peddling twaddle. Unfortunately, there seems to be a market for twaddle.