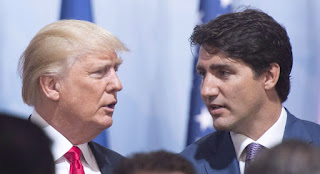 NAFTA 2.0  has landed. But, Lawrence Martin writes, that doesn't mean there will be a rapprochement between Canada and the United States. That's because Canadians despise so much of  what Trump stands for:

Though the trade problem has been alleviated, there is still so much more to oppose. There are his race-baiting proclivities and immigration policies which run counter to the diversity drive in Ottawa. There’s his attitude toward women – which is straight out of the 19th century. There’s the fact that he is an environmental ignoramus who is rolling back programs to address climate change.

There’s his nativist creed which threatens the international order and its institutions. There are his authoritarian impulses and his refusal to stand up to thugs like Vladimir Putin. There are his taxation policies which primarily enrich the rich, his opposition to gun control and his extreme rhetoric which divides rather than unites.

Mr. Trump doesn’t bear any animosity toward the Canadian people as such. He “loves” Canada, he says. But in terms of values, beliefs and hostile actions, no president has been more anti-Canadian. He is not about to change and if Prime Minister Justin Trudeau is to represent his population, his post-trade-deal approach with Mr. Trump must reflect its disdain.


In what ways can Canada  show that disdain? Certainly not by reducing issues to name calling -- which is Trump's favourite mode of speech. There are much more meaningful ways to do it:

It means staking out Canadian ground in a firm clear manner. It means that even though Mr. Trump opposes the World Trade Organization, Ottawa should go ahead, as it is planning, and host a conference of 13 WTO countries later this month.

It means Foreign Affairs Minister Chrystia Freeland should continue as per Canadian tradition to speak out loudly in support of multilateralism and collective security. If it rankles the U.S. State Department, good. It means, especially since Canada is a border country, registering more virulent opposition to Mr. Trump’s dismantling of the Environmental Protection Agency.

It means pushing harder on trade diversification. It means carving out good relations with Congress and other key players other than the President. Ambassador David MacNaughton is planning a golf game with U.S. trade negotiator Robert Lighthizer. Good idea, especially if he lets the American win a couple of holes.


At some point Trump will be gone -- the questions are when and how. But, eventually, he'll sink back into the slime. Until then, Canada would be wise to maintain its strategic distance.

Image: ipolitics
Posted by Owen Gray at 8:47 am

Since he is no longer in power, I guess Jean Chretien can afford to be acerbic about Trump, Owen. In today's Star, there is this from his new book:

“I fear that Hillary’s defeat, and the arrival of the fanatical Trump, mark the true end of the American Empire”.

I always thought that Chretien was a pretty good judge of character -- and, therefore, a pretty shrew politician, Lorne. And I fear he's right.

Good article, with good advise. The President is a lout. The rest of America is there and they aren't all louts. They're good honest people trying to make their country a better place. Might as well engage the ones who might be of some help in the future and support them now, so at least give them the idea not all is lost in North America.

Saw what Chretien had written and he is oh so right. We have better take note. It is unlikely the American empire will rise again, just as Britain, France, and Russia along with others never did rise again. It may be the century of Asia or it may be no ones century.

Whatever is coming we would be best off to support those with whom we share values and let the rest fall where they may, because, fall they will. '

The ruling class doesn't include the likes of Trump or Dougie Ford. They are the pawns of the ruling classes. Freeland and Trudeau ought to just stay on course and lets hope Canadians are smart enough to keep Trudeau as P.M.

Neighbours need to take note of each other, e.a.f. But they don't have to party together -- particularly when the party will eventually end in burning the house down.