The March To Oblivion 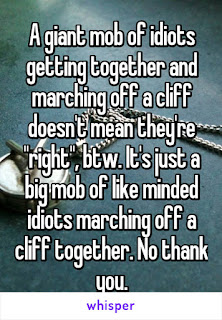 The United Nations has just told us that we have twelve years to prevent a global catastrophe. Global warning will soon have disastrous consequences. But the U.N. report isn't on Doug Ford's and Jason Kenny's radar. Geoffrey Stevens writes:

Appearing together before an overflow crowd of 1,500 true believers in Calgary, the two provincial leaders — one in power, the other in waiting — pledged their mutual, undying opposition to carbon taxes, and they took turns swatting enthusiastically at Prime Minister Justin Trudeau.

Trudeau, of course, is doubly damned among Conservatives in Alberta. Not only is he a Liberal who is friendly with NDP Premier Rachel Notley, he is the son of Pierre, the Great Satan of oilpatch That was back in 1980, but the grievance doesn't just linger. It bursts into flame whenever the issue of national carbon pricing is raised. Justin Trudeau did have the backing of both Ontario and Alberta for it, but Ford has withdrawn Ontario's support and Alberta's support, which was contingent on completion of the Trans Mountain pipeline, is wavering and may be lost.

That was red meat for the Calgary "Scrap the Carbon Tax" rally last Friday. Neither Kenney nor Ford is much of an orator, but both have a bit of Donald Trump's knack for exploiting a sympathetic crowd.

The crowd roared approval when Kenney called Notley's carbon tax "the biggest lie in Alberta's history" and promised that a United Conservative Party government would repeal it. It roared again when the Ontario premier bestowed the blessing of Ford Nation: "Stay strong, your next election is one that conservatives can win, an election we will win, and an election we must win."mythology, who will never be forgotten or forgiven for his notorious National Energy Program.


The biggest lie in Canadian history? Other provincial premeirs are falling in line behind Ford and Kenny:

On his way to Calgary, Ford stopped in Saskatchewan long enough to pick up the support of Premier Scott Moe and his Saskatchewan Party. Meanwhile, Manitoba's Progressive Conservative premier, Brian Pallister, announced he would no longer support a carbon tax.

If, as expected, New Brunswick joins the flock, Doug Ford, the most improbable of premiers, would find himself at the head of a block of five provinces out to do battle with a federal government that is supported — for now, at least — by two major provinces, British Columbia and Quebec.


What Ford, Kenny and the others are selling is the biggest lie in Canadian history -- that we'll be alright as long as oil is combustible and we can live in purposeful ignorance.

And they march -- cheering -- to oblivion.

What does it say about our society that our political response to global warming is determined by:

1) A party that denies reality

4) A small, untested fourth party that sounds good now but has no chance of having to put words into actions.

[To its credit, the NDP base stuck by the LEAP manifesto despite the anger of their Alberta NDP convention hosts.]

The hourglass grains of sand are quickly running out.


It used to trouble me deeply when, under Harper, Canada was seen as a climate pariah. Trudeau, we were sure would change all that. Did he not, after all, stroll onto the floor of the 2015 Paris Climate Summit and proclaim "Canada's back!"

Here we are, three years later. The government of the day isn't even close to meeting Steve Harper's emissions cut target. The biggest thing they've done on the climate change front is double down on a new, 50-year pipeline to flood the world markets with bargain-rate, high-carbon bitumen.

As for carbon pricing, that too is a joke. The latest studies show that an effective carbon price starts at $200 per ton. Some put the figure at twice, even three times that. Trudeau wants to start at $20 per ton, going up to a paltry $50 per ton. It's a laughably flawed plan. For example, provinces that support carbon taxation will keep the revenue raised. Provinces that hold out will be treated differently. Ottawa will collect the tax and will then remit it directly to the residents of the hold out provinces. Residents in Quebec and BC won't see any nice cheques in their mailboxes.

It's a policy that's running off in a half dozen different directions, Mound. And we're working against the clock.

For conservatives, it’s governance by Cleek’s Law. All that’s important is pissing off and showing up the libs. Actual consequences be damned.

For progressives…, well we have people like Mound up above, who instead of looking at the carbon tax as a starting point to build on, instead shit all over it and the people behind it because it doesn’t go far enough. Making the perfect the enemy of the good and all but ignoring the practical difficulties of how hard it is to get something like carbon pricing started given the massive and well-funded opposition fighting against any such restrictions, and so ultimately empowering the very people like Scheer, Ford and Kenney whose positions on this topic is far worse and who such progressives claim to actually be against. Little wonder we’re basically screwed.

It's not easy governing a federation, B.J. But this is a case where we all have to be pulling in the same direction.

Given Jason Kenney's religious bent, I can see why he isn't into "saving the environment". He either thinks God won't let it happen or if it happens he will be saved as one of the "godly" ones, or they all go to heaven to be with jesus.

Now dougie, never did strike me as a religious type. he's just too stupid and those who keep him in office just want to ensure they can make as much money as possible. When the climate crisis really happens the financial elites will most likely be able to get by, but 4 or 5 billion will die. Dougie perhaps thinks he'll be one of those who survives. What dougie doesn't understand, he is the tool of the financial elites, he isn't one of them, so when his usefulness is over he'll be kicked to the curb, just like Trump will, because Trump isn't as rich as he makes out to be and once Mueller is finished with him, he may no longer count.

Many within the Conservative party are part of that "deeply religious" bunch of nut bars, a la Harper. They think god will save them all. Now as I recall Harper's religion did espouse, the end of times was imminent, well if its imminent why do anything to save the environment?

Of course as a blogger in B.C. pointed out, Canada ships a lot of coal through the port in Twassen, outside of Vancouver, which comes from the U.S.A. and it all gets shipped to China. We could refuse to ship it, but you know the money, the money, the money.

We have seen the effects of climate change already and not too many are ready to give up much of anything because it hasn't hurt us in the first world. It has a much greater impact on the poor. Yes, California, B.C. and Alberta have had massive forest fires, but once they're over, people continue with their way of life. Insurance companies and governments pay out and off they go. Not even the extended drought in California got the other parts of the U.S.A. to pay attention.

Wait until Christmas and you'll see how un environmental we all are. People will be buying new cell phones, every new t.v., techie piece of equipment around. Saving the environment isn't about not using plastic bags or giving up straws, which is easy and doesn't do much. Saving the environment is changing how we live, from the amount of clothing we own, the size of our houses, how we source our food, how big the malls are, etc. That isn't about to change. Every one wants something new all the time. How many computer monitors were thrown in the land fill and new ones purchased once flat screens came in, how many people up grade their monitors every time a new type comes out. Mine is still the old style, with the big back and one young person asked what it was. You'll be much more environmental if you keep you stuff until it breaks and can not be repaired. Its a revolutionary concept but one which will make corporations ever so unhappy.

Until climate change kills those in our social circle most won't do anything.

Your comment is spot on, e.a.f. It's about changing the way we live and how much stuff we have. And stuff costs money. In the end, it's all about the money.

Exactly, thwap. We're running out of time and we're spinning our wheels.