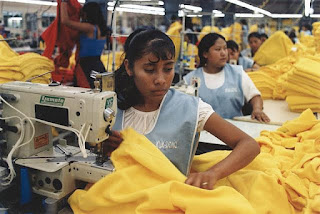 "We like to think that we put an end to slavery one hundred and fifty years ago."

"We" do? You mean the "We" of the USA and thus merely repeat US lore, not Canadian, where slavery was abolished in 1834 by the British Empire worldwide.

The Americans still practise slavery in their for-profit prison system:
https://www.theatlantic.com/business/archive/2015/09/prison-labor-in-america/406177/
Enlightening to read, and not caused by Trump.

I'll concede the US did quite a reasonable job of disbanding slavery federally from 1865 by integrating their armed forces - until that exceptionally nasty little piece-of-work, the white Southern supremacist and self-styled intellectual, Woodrow Wilson, brought in the Jim Crow laws about 1912, segregating the US military. That lasted until the 1950s. It is a simple matter to visit shorpy.com to see high resolution photos from the Library of Congress, showing group photos of integrated crews of US Navy battleships in the 1890s - they don't appear to hate each other, either. Wilson is the lynchpin upon which the US rebuilt its racial hatred unofficially. And he was the one who started the chest-beating, flag-waving ultra patriotism propaganda machine during WW1 when the US wasn't even involved. As we know, the US won WW1 according to them, and afterwards Wilson had the chutzpah to lecture Europe's finest with his Fourteen Points, the implementation and sometimes rejection of various items led directly to WW2.

South Africa officially ended slavery in 1834 being a British possession, but the Boers were so upset they embarked on their great Trek to the hinterland so they could keep slavery:
https://www.sahistory.org.za/topic/slavery-south-africa

What went on in Rhodesia after Cecil The Man Rhodes got over using local labour, shall we say very inexpensively, to dig up diamonds in Kimberley, South Africa was none too swift either, being the British hushed-up equivalent of the Boers' continuing use of slaves on the veldt.

Had relatives, (my South African uncle's family in fact) in Rhodesia completely blind to humanity and unapologetically racist when they left in 1960 while Smith was arguing for segregation when the place had been booted out of the Commonwealth. Left for money, not politics - I was not impressed with my pathologist uncle who then ran a lab (institute in name of course) in Harrogate UK, funded by the baccy industry to prove tobacco didn't really cause lung cancer. About matched the profile of his social outlook. Today he would have made an excellent climate change denier. Just a lovely guy. My cousins suffered greatly socially.

To get back on track, along with his pal Rudyard Kipling, who invented the term for blacks being "the white man's burden", Cecil Rhodes was a racist exploiter. There is now a debate in Oxford, my home town, about taking down his statue but the head of the college, whose name I forget on purpose, argues it should stay, because other than a few major character flaws, Rhodes had bestowed on the college in the past a lot of money, started the Rhodes Scholarship of course and was just a lovely chap in person. Well, that's all right then.

What went on in the Belgian Congo for two hundred years is not fit to print, everyone now acknowledges.

I take your point about the modern slavery you highlight, but again reiterate you should remember we live in Canada, not the US when you use the collective "we".

Well, some would have you believe that our democratic principles are built on judeo-Christian values. And they may be right:

Slaves, obey your earthly masters with deep respect and fear. Serve them sincerely as you would serve Christ. (Ephesians 6:5 NLT)

I take your point, BM. Your reminder that the British officially abolished slavery long before the Americans deserves mention. My point is that the Civil War is often seen as the turning point when slavery was finally abolished -- except that it never really was.

It's still with us.

Slavery has long been viewed as being part of the divine plan, Cap. It springs from the same minds who proclaim that God is on our side. Lincoln, who abolished American slavery, famously
said that he hoped he was on God's side.