The Boss From Hell 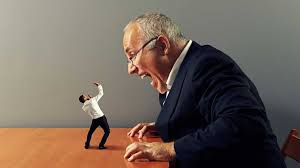 Paul Krugman writes that Donald Trump is every worker's nightmare -- the boss from hell:

Such bosses have the reverse Midas touch — everything they handle turns to crud — but they’ll pull out every stop, violate every norm, to stay in that corner office. And they damage, sometimes destroy, the institutions they’re supposed to lead.

Donald Trump is, of course, one of those bosses. Unfortunately, he’s not just a bad business executive. He is, God help us, the president. And the institution he may destroy is the United States of America.

The evidence of Trump's failure is wide and deep:

He rejected the advice of health experts and pushed for a rapid economic reopening, hoping for a boom leading into the election. He ridiculed and belittled measures that would have helped slow the spread of the coronavirus, including wearing face masks and practicing social distancing, turning what should have been common sense into a front in the culture war.

And the result has been a disaster -- both epidemiological and economic.

Over the past week the U.S. death toll from Covid-19 averaged more than 1,000 people a day, compared with just four — four! — per day in Germany. Vice President Mike Pence’s mid-June declaration that “There isn’t a coronavirus ‘second wave’” felt like whistling in the dark even at the time; now it feels like a sick joke.

And that evidence is put into stark contrast when the United States is compared to Germany:

America’s economic contraction in the first half of 2020 was almost identical to the contraction in Germany, despite our far higher death toll. And while life in Germany has in many ways returned to normal, a variety of indicators suggest that after two months of rapid job growth, the U.S. recovery is stalling in the face of a resurgent pandemic.

Because the Trump team insisted that a roaring recovery was coming, and refused to notice that it wasn’t happening, we’ve now stumbled into a completely gratuitous economic crisis.

Thanks to Republican inaction, millions of unemployed workers have seen their last checks from the Pandemic Unemployment Compensation program, which was meant to sustain them through a coronavirus-ravaged economy; the virus is still raging, but their life support has been cut off.

So Trump has completely botched his job, bringing unnecessary pain to millions of Americans and unnecessary death to thousands.

Donald Trump claimed he was a businessman. But he never had to face a board of directors. It's long past time that The Board -- the citizens of the United States -- fired him.
Image: Productivity Hub
Posted by Owen Gray at 9:29 am

The last time Trump faced a board of directors was during his impeachment. Sadly, the board was so filled with cronies and sycophants it failed in its duty to act in the corporation's best interest. Now the company's on the verge of failure and it's not at all clear that a new board and CEO can fix the damage done. In short, never hire a CEO with no experience and a bad track record in his field.

Oh, I wholeheartedly agree, CED. Senior management -- as well as all of Trump's employees -- need to be escorted to the door.

I just finished reading Mary Trump's book, Owen. It explains much about Donald Trump's dysfunction and incompetence, which appear largely to be the result of his never having to own up to anything, thanks to a manipulative father who ultimately turned over the car keys to someone with no driving skill.

I've only read excerpts from the book, and I've heard a couple of interviews, Lorne. My impression coincides with yours. An incompetent parent fostered a totally incompetent child -- then he unleashed him on the world.

Now even some Republican stalwarts argue that their party is beyond saving, it needs to be burned to the ground so that, like Phoenix, it can arise from the ashes. Their thinking is that the party has been rotting out from the inside for decades. Trump is merely the culmination of the ruin tracing back to Nixon and the "southern strategy." That married the GOP to the white voter, something that was nurtured by a diet rich in fear and anger and the threat of demographic change. As white America loses its majority, the GOP base is also aging out. The GOP has tried everything - gerrymandering, voter suppression, fear mongering - but their base is dwindling.

From what I've read it seems that the Republicans can foresee losing the House forever and having to retreat to the Senate where their hold on low-population states, i.e. 'white states', still allows them to tread water - for now.

It's hard to imagine what a Republican restoration would look like for the GOP and angry white America are joined at the hip. The GOP can't be reborn for the 21st century without jettisoning that part of its following. That could fracture the right and spawn rump parties. The idea boggles the mind.

It truly is mind-boggling, Mound. The GOP has tried to do something which is impossible. They have taken Bill Buckley's advice. They have stood athwart history and have yelled, "Stop!" It simply can't be done.

Donald trump is a businessman but what his business is, is a whole other thing. these days its the making over of the U.S.A. in his own image and that of his billionaire friends. For that to happen lots of people need to die. In my opinion, he'd like to have approx. a 100M fewer people but that isnt' going to happen, I think,, but just the same, he's making a good start. If trump knows one thing its how to destroy companies, which should be making money and now he is doing it to the wealhist country in the world. the billionaires and multi millionaires will have their money, the rest not so much. More like Russia, which will make Putin ever so happy.

If there's one thing Trump is good at, e.a.f, it's destroying things.