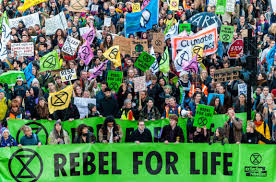 The battle between people and capital continues. George Monbiot writes that, for the last forty years, capital has been winning. The problem is our first-past-the-post political system:

Our system allows the victorious government a mandate to do what it likes between elections, without further reference to the people. As we have seen, this can include breaking international law, suspending parliament, curtailing the judiciary, politicising the civil service, attacking the Electoral Commission and invoking royal prerogative powers to make policy without anyone’s consent. This is not democracy, but a parody of democracy.

By contrast to our five-yearly vote, capital can respond to government policy every second, withdrawing its consent with catastrophic consequences if it doesn’t like its drift. There’s a massive imbalance of power here. The voting power of capital, with modern trading technologies, has advanced by leaps and bounds. Electoral power is trapped in the age of the quill pen.

Our political parties are trapped in the old paradigm. In moments like this, real opposition comes from outside parliament:

The democratic and environmental crises have the same roots: our exclusion, for several years at a time, from meaningful politics. In some places, particularly Ireland, Iceland, France, Taiwan, British Columbia, Ontario and several Spanish and Brazilian cities, a host of fascinating experiments with new democratic forms has been taking place: constitutional conventions, citizens’ assemblies, community development, digital deliberation and participatory budgeting. They are designed to give people a voice between elections, tempering representative democracy, allowing them to refine their choices.

There are historical analogs:

Like the suffragettes and the civil rights movement, it was excoriated for threatening “our way of life”. Almost all democratic advances, everywhere, have been secured by people who were branded “anarchists” and “criminals”.

Today's opposition generally falls under the title The Extinction Rebellion. If that rebellion generates policy changes, there is hope for the planet. If it doesn't, we do -- indeed -- face extinction.
Image: linkedin.com
Posted by Owen Gray at 9:27 am

Email ThisBlogThis!Share to TwitterShare to FacebookShare to Pinterest
Labels: Now Or Never

We were hoodwinked back when Reagan, Thatcher and Mulroney set out the welcome mat for Hayek and Friedman. They were idiots or scoundrels, probably a blend of both. Bad Ronnie, Bad Maggie, Bad Brian.

We can't blame them for everything though. Our subsequent decades of complacency, well that's on us. We should have, could have, fought them bloody fang and claw, to demand electoral reform, a restoration of the Vox Populii, but we didn't. That business about 'blessed are the meek'? My arse!

FPTP has delivered every government in Canadian history. It wasn't too bad when there were but two flavours on offer, Red or Blue. It hasn't been worth a shit since we developed a Ben and Jerry's of political parties. Now the will of three voters out of five is neutralized. When that's compounded by the evolution of corporate democracy, the politics of neoliberalism, we're all buggered. As Monbiot points out, we the people, are consulted, in the sense of being shamelessly lied to, about once every four years to seduce us out of our votes by pols who never seem to remember their campaign platforms for more than a few months once they've won power.

Every Liberal and every Conservative grouses about this - when they lose. When the cards go their way, however, it's just dandy.

When the bond between voters and their elected representatives is dissolved, it's too tempting for the political caste to let narrow, powerful, special interests prevail, more often than not at the expense of the public interest.

And that, kids, is precisely where we are today and where we'll be tomorrow and for as long as we tolerate this corruption of democracy.

I agree wholeheartedly, Mound. That's precisely where we are today. And today's political class won't change things unless -- and until -- we, the people, demand that things change.