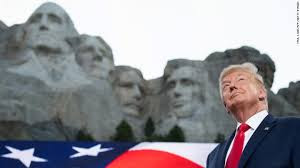 If you're looking for a philosophy behind what Donald Trump does, you're on a fool's errand. But, Rick Salutin writes, there is a common thread that ties everything Trump does together. It's nihilism:

What Trump means by and fears in anarchism would probably be better described as nihilism. It's a complicated and historically amorphous term. (Nietzsche wasn't a nihilist but he thought it should be overcome with a new, harshly honest morality; the Russian nihilists wanted to dismantle their brutal world and replace it with the nobler qualities of peasants and the early church.)

But in Trump, the heavy metal, guitar-smashing caricature of nihilism finds a home. He may be the first pop nihilist ever among world leaders. There's something touching in him saying to John Kelly, at a battlefield cemetery, that he doesn't get it, what did they die for? What was in it for them? Kelly may've been tempted to pat him on the back and try futilely to explain it.

This is nihilism and lack of empathy, not in Bill Clinton's shabby "I feel your pain" sense; but in the sense that there are worlds, literally, to lose, and he doesn't know it. He's less irresponsible than impenetrable. This is the challenge U.S. voters face in two months and it's not about medicare-for-all any more, Toto. Will they be up to it? Personally, I'm optimistic but that's another story.

As Edith Bunker said, as she examined Archie Bunker's head, "Grass don't grow through concrete." Nothing grows inside or outside Donald Trump's head.

Email ThisBlogThis!Share to TwitterShare to FacebookShare to Pinterest
Labels: The Hollow Man

I have trouble with Salutin's diagnosis. I think that's the preserve of mental health professionals, not a subject for columnists casting bones and reading entrails. Trump, as so many of these professionals have opined, is mentally ill, perhaps profoundly ill.

He doesn't just accommodate cognitive dissonance, he seems to thrive on it. He has a capacity to embrace irreconcilable contradictions that allows him to draw upon whatever idea suits the moment before switching to another when the need arises. We try to make sense of his ravings as though he is sane only he's not. He does not have the same thought processes grounded in reality and consistency as those who try to make sense of this guy.

I agree that Trump is mentally ill, Mound. And because he is so severely ill, discovering any consistent thought pattern behind what he does is impossible. But, as the American columnist Eugene Robinson said the other day, Trump has a hole where his soul should be. In that sense, he's a nihilist. Like Macbeth, he is "full of sound and fury, signifying nothing."

By the way, I really would like to see your last comment that for some reason didn't get through.

.. Trump meets all DSM 5 criteria as Sociopath..
but he's one who discover how to do so in public on a grand scale
He's a sort of mutation a la Animal Farm style