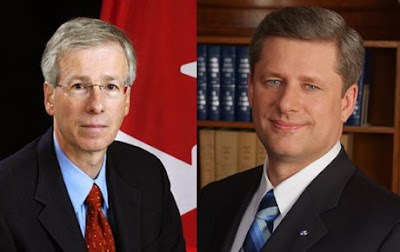 Surely, when historians write about last weekend's Liberal leadership convention, they will note that both the Prime Minister and the man who would replace him share the same name. Linguistically, the difference between them is a matter of accent. A bilingual Canada wouldn't have it any other way. Of course, the differences between them run much deeper than that. But more about that in a minute, because there is something more important than what divides these men.

What was most notable about what happened this weekend was how many of us didn't see it coming. What we missed was a generational shift in Canadian politics. Mr. Harper, Mr. Dion and the man who catapulted Dion to the leadership of his party -- Gerard Kennedy -- are at the tail end of the baby boom generation. Unlike Mr. Ignatieff, Mr. Rae and this writer -- who were born immediately after the Second World War -- Mr. Harper was all of eleven years old, and Mr. Kennedy was a year behind him, when the October Crisis occurred. And Dion, at fifteen, had not yet graduated from high school. They were all even younger during the Cuban Missile Crisis. The issues which seized our imaginations are not the issues which seize theirs.

For them, the crisis they face is, in Mr. Dion's words, " no less than the reconciliation of the people and the planet." The threat of nuclear annihilation is still out there; but, for this generation of Canadians, the threat of environmental meltdown looms much larger. I have argued in an earlier post (October 25th) that Stephen Harper doesn't see the threat. Perhaps this week's events will focus his attention. But, given what appears to be his libertarian core, I have my doubts.

So, as one generation cedes power to another, the issues change. And both men share more than a name. Both work from a foundation of non-negotiable principles. For Harper individual autonomy is paramount. Government is a threat in most areas of human activity; and most people should be left to fend for themselves. Dion believes in a united Canada -- or at least in the principle that if Canada is divisible, then Quebec is, too. And rather than leaving people to fend for themselves, Dion believes that government needs to invest in people, not simply deliver cheques to their mailboxes.

They also share significant weaknesses. It would appear that both lack people skills -- a surprising fault in a politician. And both apparently find it hard to compromise, another surprising weakness in men who seek to lead a country which has been built on compromise.

So where does that leave us? Well, to begin with, the next election may actually be a policy driven election -- an election about ideas rather than the cynical manipulation of images and sound bites. It could also be an election about the future rather than about the follies of the past -- although that, perhaps, is too much to hope for. Or it could be an election which solves nothing. It could replace one minority government with another; or it could simply reaffirm the present minority government for a second volatile term.

It's hard to predict the outcome. At the moment, Canadians are waiting to see what develops.
Posted by Owen Gray at 8:25 am

Email ThisBlogThis!Share to TwitterShare to FacebookShare to Pinterest
Labels: Dion and Harper