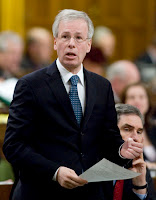 There should be no attempt to guild the lily. Stephane Dion and his party took a drubbing last week in three Quebec by-elections. The results have prompted some commentators to predict that the Liberal Party of Canada has outlived its relevance. Writing in the Globe and Mail last week, Jeffrey Simpson declared, "For more than a century, and up until recently, the Liberal Party formed the sturdiest political bridge between French speaking Quebec and the rest of Canada. . . Now that bridge has collapsed."

Having lost all three elections, there are some inside the party who would like Mr. Dion's head served up on a platter. The rumours of a coup did not take long to materialize. But Lawrence Martin, also writing in the Globe, warned Liberals -- particularly supporters of Michael Ignatieff -- to think again. Quoting Shakespeare's Iago -- not an altogether appropriate allusion -- Martin counselled patience: "How poor are they that have not patience. What wound did not heal but by degrees?"

For, any fair analysis of the three elections should not just concentrate on Dion's weaknesses (of which there were several) but on the strengths which the other two parties brought to the contests:

To begin with, even though Outremont has been a Liberal bastion for seventy-five of the last eighty years, the fact is that the NDP had a star candidate in Thomas Mulcair. A former minister of the environment in the Liberal government of Jean Charest, Mulcair is a household name across the province. His positions are considerably to the left of Charest -- who, one should remember, ran as a Progressive Conservative when he was in Ottawa; and, as his recent tax cuts confirm, is more of a centre right politician than Mulcair. Perhaps Mulcair's resignation from Charest's Liberals was inevitable. Mulcair also owns a political pedigree. He is, after all, the great grandson of a former Quebec premier, Honore Mercier. Add to that the fact that Jack Layton is no stranger to Quebec politics -- he was born in Montreal, graduated from McGill, and his father was, like Charest, a Quebec member of Brian Mulroney's cabinet -- and it becomes clear that, at least to some degree, Quebecers could look at the former as a native son and at the later as -- at least -- a returning prodigal son. Mulcair was the perfect candidate to challenge the Liberals in Outremont.

In the other two ridings -- both rural -- the Liberals were doing battle in old Union Nationale territory. Until the advent of the Bloc Quebecois, these ridings were strongly nationalistic but also strongly conservative. So it should have surprised no one that, when these electors were presented with a federalist and a conservative option -- something that had not been available to them since Bouchard persuaded most of the Conservative Quebec caucus to follow him out of the party -- they returned to their roots.

As Chantal Hebert wrote in The Toronto Star, the story behind these three elections is about ex-Bloc voters fleeing to the NDP and the Conservatives. That is why Gilles Duceppe has drawn a line in the sand. He says he will not support October's speech from the throne unless the Bloc has concrete input into government policy. If Stephen Harper does not reciprocate, there will be an election. Duceppe is betting that Harper's capitulation to his demands -- or an election -- is the best way to stop the hemorrhaging of voters from his party.

It all adds up to something that happens every generation or so in Canadian politics. The old log jam between Federalist Ottawa and sovereignist Quebec has -- for the time being -- been broken.The entire political landscape in Quebec has changed in the last decade. The question is, have the Liberals taken notice?

First indications are that they have not. Mr. Dion was elected because of his integrity. He was untouched by the sponsorship scandal and he had the reputation of a boy scout. In fact, Paul Martin had pushed him out of his cabinet; and, even though Dion was the author of the Clarity Act, and he was the party's chief salesman for the legislation, he had no ties to Alphonso Galliano and other Liberal bagmen who so generously distributed federal money to party supporters. Dion was a policy master who carried no scent of corruption. Unfortunately, he is an awkward politician whose shrillness alienates members of his own party, not to mention the ordinary citizens of his province.

There has always been a tension in Quebec between proponents of social democratic policies and those who favour small "c" conservative government. Until recently, the Parti Quebecois and the Bloc Quebecois have been able to unite these two polar opposites under the banner of Quebec Nationalism. As that nationalism wanes, the NDP has decided to play to the social democrats; and the Conservatives have played to those who favour limited government -- while at the same time, appealing to Quebec nationalists by proclaiming that Quebec is "a nation within a nation." Mr. Harper and his party will come to rue that policy. Anyone familiar with the history of Quebec knows that it will come back to bite them.

For the time being, however, the Liberals under Dion are stuck in the middle, not appealing to either segment of the population. But the Liberals still have one historical asset on their side. They are the only federalist party to elect French Canadians as leaders. From Laurier to St. Laurent, through Trudeau, Chretien and Dion himself, they have consistently alternated English and Quebecois leaders. (Quebcers always saw Paul Martin, from Windsor, as a Franco- Ontarian. The Conservatives, under Brian Mulroney, came close to choosing one of nous autres.)

French Canadians have always been acutely aware that they are an island in an anglophone sea. And in any federal election they have always asked, who will best look after our interests? They might not have always agreed with everything their leaders did. They were unhappy with Laurier when he reached a compromise between Protestants and Catholics over public education in Manitoba. And, even though Trudeau had imposed the War Measures Act, they knew every time they saw both languages on the back of a cereal box that he had brought them into the centre of the Canadian political system.

The challenge facing Dion and the Liberals is to prove to Quebecers that "Canada's natural governing party" is the best party to look after their interests. The sponsorship scandal struck at the very foundation of that conviction. Instead of brokering their place in the federation, Quebecers still feel that the Liberals played them for fools. The scandal did immense damage to the Liberal brand. And, while they were trying to recover, the political landscape shifted under their feet. Any recovery will require the party to acknowledge those truths. And it will also require that a man who is not a natural politician heed the advice of those in the party he does not trust -- the back room strategists. If Dion and his party do these things, their predicted demise -- as Mark Twain once quipped -- will have been "greatly exaggerated."