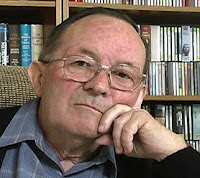 In a recent article, The Military-Industrial Complex: It's Much Later Than You Think, Chalmers Johnson hearkens back to Dwight Eisenhower's last speech as president. "We have been compelled," said Ike, "to create a permanent armaments industry of vast proportions . . . We must not fail to comprehend its grave implications . . . we must guard against the acquisition of unwarranted influence, whether sought or unsought, by the military-industrial complex."

"Since 1961," writes Chalmers, "there has been too little study of, or discussion of, the origins of the military-industrial complex, how it has changed over time, how governmental secrecy has hidden it from oversight from members of Congress or attentive citizens, and how it degrades our constitutional structure of checks and balances."

Chalmers then goes on to trace -- making reference to the work of Thomas Frank and Sheldon S. Wolin -- how modern neo conservatives have sought "to discredit 'big government,' while capturing for private interests the tremendous sums invested by the public sector in national defence." He gives particular attention to Wolin's analysis. "The privatization of public services and functions," Wolin argues, "manifests the steady evolution of corporate power into a political form, into an integral even dominant partner with the state." It turns our democratic institutions into "one[s] where the remaining democratic elements of the state and its populist programs are being systematically dismantled."

This trend has been going on for some time now -- with both supposedly liberal and conservative governments hopping on the contracting bandwagon in the name of efficiency. But, as tales of how the Iraq War has been executed with the help of private contractors -- there are as many of them on the ground as there are soldiers; and, as the Harper government rebuilds the Canadian Armed Forces -- it is worth remembering that Harper's first Minister of Defense earned his living as a lobbyist for arms manufacturers before he entered government -- the need for careful and critical oversight becomes paramount.

Without such oversight, writes Chalmers, we "heighten the risks of war by accident, or by presidential whim." And any government which seeks to obstruct access to information is suspect. Mr. Bush and Mr. Harper have not been particularly cooperative with those constitutionally established bodies whose job it is to act as the people's eyes and ears. That, I suggest, is no accident.
Posted by Owen Gray at 10:22 am