A Ghost from the Past 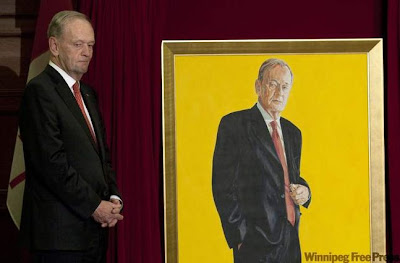 Claiming that it was "a good day for a hanging" Jean Chretien returned to Parliament Hill last week. He proclaimed public service "a very noble life;" and, like most former politicians, he enjoyed being the centre of attention.

Of course, some in the audience were drawing lessons from his time as prime minister. Stephen Harper -- in a remark that revealed more about himself than it did about Chretien -- said, "He knew instinctively what it took to win." Perhaps the lesson Harper took from Chretien also explains why the present prime minister didn't bother to attend the ceremony in the Centre Block two years ago, when they hung Joe Clark's portrait next to Chretien's.

But the man who should really be pondering Chretien's success is Michael Ignatieff. To his credit, Ignatieff is not the dictator Chretien was. But, as Lawrence Martin wrote in The Globe and Mail last week, anyone trying to mimic "the old lion's tough ways" is taking the wrong lesson. "He was at his best," Martin wrote, "when he was the little guy from Shawinigan, when he stood his ground, at one with the values of everyday people and the country."

It was when Chretien insisted that the Clarity Bill would be passed; when he refused to join George Bush's "coalition of the willing;" and when -- with Paul Martin's help -- he destroyed the "debt wall" which Brian Mulroney and his predecessors had bequeathed to him, that Chretien earned his place in Canadian history. He could mangle both official languages; and (when the pen he gave Queen Elizabeth refused to cooperate) he could mutter "merde" -- a remark which seems to have endeared him to the monarch.

Micheal Ignatieff would do none of these things. But neither will he stand his ground. When he told Mr. Harper his time was up, he then decided to give the prime minister more time. After he said that Quebec's new health care user fee was acceptable, he backtracked and said that it could not stand. And, after saying that the Auditor General should not be allowed to scrutinize MP's expenses, he now says he will accept Ms. Fraser's oversight.

He should have accepted that oversight in the first place. But that is not the point. When Mr. Ignatieff takes a stand, Canadians have come to expect that -- like this country's climate -- it can change quickly and radically. Ignatieff's vacillation is the reason Liberal poll numbers are now in the 25% range.

Michael Ignatieff has had an illustrious career. And he has apprenticed under Issiah Berlin. But he lacks Chretien's experience and Chretien's common touch. Those deficits are becoming more -- not less -- apparent.
Posted by Owen Gray at 8:39 am

I still think Bob Rae was the best choice all along, but maybe that NDP baggage is just too much to overcome for too many people.

Like, you, Chris, I wish the Liberals had chosen Bob Rae. But that's water under the bridge.

Ignatieff, the public intellectual, should be able to analyze the reasons why he has failed to connect with Canadians. He has Chretien as a template.

While no one is suggesting that he adopt Chretien's vices, it wouldn't hurt to emulate Chretien's strengths.

Hmmmm....who was weak and not a professional politician and not charismatic? - Mike Pearson.
Who was more concerned about Canada than a few seats in the same time period? - Tommy Douglas

Mackenzie King had no personality and wasn't a great speaker or charismatic.

Your comment is spot on. Perhaps Pearson's and Douglas' success rested on what each perceived was common in their world views.

After all, it was Pearson's boss, Louis St. Laurent, who said that a member of the NDP -- it was called the CCF back then -- was "a Liberal in a hurry."

These days -- in Ottawa and in Washington -- politicians live in a Manichean world, where the members opposite are the devil's spawn.

Perhaps they are merely like their constituents. If they are, we are all in trouble.

I worry about Rae's "NDP baggage." Though I think it's more appropriately termed, took-power-just-after-what-was-at-the-time-the-beginning-of-the-worst-economic-downturn-since-the-1930s baggage. I wonder what would have become of Rae if he had first been elected in 1995...

And Harper has overcome [or been overcoming?] his Reform Party baggage.

Whenever I see Chretien in the news, (e.g., the recent "public hanging") I can't help but missing the guy. But I'm worried I'm idealizing too much. He had a tendency to campaign from the left, but govern from the right. Things may have been changing in his third term... Perhaps that's evidence of him being a liberal, i.e., not in a hurry?

I wrote at the time of the Montreal convention that Rae was the best choice for the job. I believe that time has proved that notion right.
However, the Liberals cannot go through another leadership shakeup.

Ignatieff will never be "a little guy." But neither was Pierre Trudeau. He never tried to be one. Still, he could adopt a Quebec patois which ordinary folks understood.

More importantly, both Trudeau and Chretien stood their ground, knowing that there were elements -- in both French and English Canada -- who would try to pillory them.

Ignatieff gives the impression that he doesn't know his own mind. When you consider his recent reversals -- and couple them with his reversal of support for the Iraq War -- a pattern emerges. It is a pattern which does not serve him well.